We can expect the announcement of GDP growth for the second quarter to be lousy—around 1 percent or so if we’re lucky, less than that if we’re not. Why is this, and what does it say about the rest of the year?

The short answer is that we got what we asked for at the start of the year. If you remember, back then we had the fiscal cliff and a record, uncontrollable deficit. Some wanted higher taxes, others wanted reduced spending; everyone wanted a lower deficit.

As it turned out, everyone got what they wanted. The fiscal cliff deal raised everyone’s taxes, the sequester cut federal spending, and the deficit has dropped significantly. Hooray!

The problem, though, is that when everyone got what they wanted, they also got some things they didn’t expect, which may have led to the current slower growth.

Let’s start with the tax increases. Disposable personal income took a huge hit in early 2013, per the following chart. 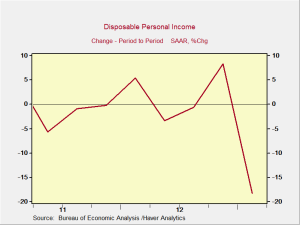 That kind of drop in disposable income certainly affected consumer spending, which represents about two-thirds of the economy. Spending continued to grow, but at much slower rates, as shown below. 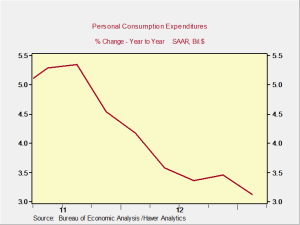 The other major negative factor was cutbacks in government spending. If you look at the composition of economic growth by sector, you can see that, in fact, government has detracted from growth for 2013. 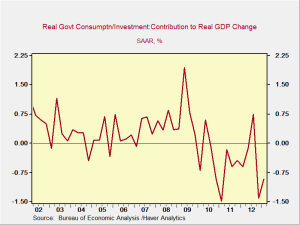 The drag may have come not only from federal cutbacks but also from state and local cutbacks. Government spending hits two ways—first from actual buying, and second from hiring. Government employment growth has actually been negative even as the private sector has shown healthy growth, as follows. 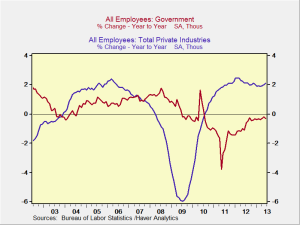 Private employment is growing at levels from the mid-2000s while government employment continues to decline, although at a slower rate.

All of this does a great deal to help explain why we’re growing as slowly as we are. What does it tell us about the rest of the year?

Starting with consumer income and spending, the sharp downward adjustment might have been a one-time shock. Typically, this kind of a shock results in a couple of quarters of adjustment, then a resumption of previous spending patterns. In other words, the adjustment may be over and faster spending growth ready to resume.

This is also supported by faster growth in incomes and a resumption of consumer borrowing. The general rise in household net worth, driven by recovering housing markets and a rising stock market, also bodes well for increased spending. Finally, the increase in consumer confidence levels to five-year highs suggests that consumers are ready to start spending again. If consumers do open up their wallets, growth levels may get a significant boost.

Next, let’s look at government spending. At the federal level, just as with the tax increases, the sequester cuts were a one-time shock, with growth set to resume again from a lower level. This suggests that the drag from the sequester should be set to roll off in the next quarter or so; by eliminating that headwind, we should see improved growth.

At the state and local levels, finances have actually been recovering, to the point that there’s a front-page article in today’s Wall Street Journal about how cities are starting to hire again. Looking at the chart above, we can see that simply bringing government employment back to stable levels should meaningfully improve employment growth overall. If we move back to net hiring, the effect maybe even larger.

The slowdown in the first half of 2013 largely appears to be an unfortunate side effect of necessary adjustments in the fiscal environment that were made at the start of the year. Those adjustments promised longer-term gains in exchange for shorter-term pain. The good news is that we should be almost through the pain and are now poised to reap any gains.