In today’s post (the last in this series, for the moment), we’ll look at the U.S. stock market.

We are in the middle of a very significant bull market—up almost 150 percent since the bottom in 2009—and the question right now is whether the run can continue. I was on a CIO panel at Financial Advisor magazine’s alternative investments conference yesterday, and the views of my fellow panelists—a really impressive group, in which I was flattered to be included—ranged from major declines to consistent, multiyear advances. Even the pros disagree. My own views, as you know, are cautious. Why that is will become clear.

Question 1: Do I understand how this works? For the U.S. market, I’d like to think so. This is one of the most transparent markets in the world, and the relation of prices to fundamentals is well supported by available data. Trading volumes also generally support real price discovery. From a mechanical perspective, there’s no reason to question current price levels. Buyers and sellers are well represented, and the market prices reflect a balance. This one has to be a yes.

Question 2: Does it make sense? Again, I think the answer has to be yes. There are fundamentally plausible reasons that prices are at current levels, and there are no flashing indicators to suggest a major short-term disconnect between prices and earnings. Note the caveats built into that statement, particularly the “plausible” and “short-term.” I think there’s a difference between plausible and correct, but, to be fair, I can’t say that current valuations are undoubtedly incorrect.

Question 3: What are the current valuation levels? This is the key question we have to ask, and it starts to get into the caveats in the previous question. Based on trailing 12-month earnings, the current price-to-earnings ratio of the S&P 500 is around 18.4, above the average of (depending on which periods you look at) 15 to 16. Arguably, given today’s low interest rates, current valuations are reasonable based on this metric. If you take a longer view, however, and use 10-year trailing earnings rather than 12-month earnings, the P/E ratio is 23 as of the start of the month, even further above the average of 16.5.

Any way you look at it, the market doesn’t appear to be cheap. Further appreciation, therefore, either requires earnings to grow substantially—a point we’ll return to in the next question—or stocks to become even more expensive. Anyone buying and expecting price appreciation is assuming one of those two things.

Question 4: Does success depend on things being different this time? When it comes to increasing earnings, I have several concerns, which I’ve written about here: Where Do Record Stock Prices Come From? and Lower Growth and Stock Market Returns. To hit the high points, we have corporate margins at almost 50-year highs, per the following chart from Yardeni Research. 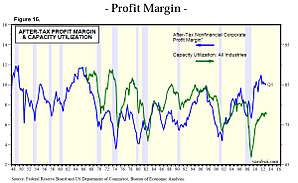 Margins appear to be rolling over, rather than increasing. Profit growth also appears to be slowing over time, per the following chart from Yardeni. 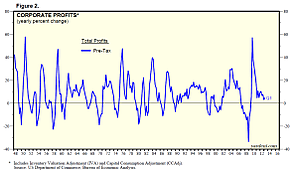 To expect profits and earnings to continue to increase is to expect it to be different this time. Not that it can’t happen, but this is a definite assumption that must be carefully considered. The most recent earnings results, as I write this, show a small increase, but that depends entirely on blowout results from the big banks. Absent that, earnings would have declined, according to FactSet.

Question 5: How does this blow up? In this case, “blow up” is a term that has to be interpreted. I don’t think there are any immediate signs of a blowup in the stock market, but the questions that have been raised do suggest that expected future returns may be based on too-rosy assumptions.

To start with, if corporate margins do in fact decline, or even remain stable, the earnings growth that the current P/Es are based on will not happen. Second, if the economy doesn’t grow as expected, we have the same issue. Third, if Washington fails to address the pending debt ceiling problem, we will certainly see equity prices take a hit. Any of these, and many others, could cause equity valuations to at least pause and quite possibly correct.

Overall, the expectation of future price increases seems to be based largely on things that quite possibly may not happen. While current valuations are plausible, the underlying assumptions are increasingly questionable. It’s often said that the market climbs a wall of worry, which has certainly been the case over the past couple of years. But at some point, the worries start to disappear from valuations, as I believe they have now—and that is the time to really worry.