I had a chance to speak on Bloomberg Radio last night about the release of the Fed minutes from the June meeting. After spending some time going through them, looking at the exact wording and thinking about what was likely to happen over the next couple of months, I came to a conclusion: there really wasn’t all that much there.

Let’s recap. First, the markets reacted strongly to Ben Bernanke’s post-June-meeting press conference, where he said that the Fed would start to reduce stimulus at some point, not soon, if the economy’s performance warranted it. The market apparently interpreted this to mean the Fed would be exiting the stimulus immediately and raising interest rates shortly thereafter, resulting in a rise in rates and a hit to the stock market.

Fed members then came out to clarify Bernanke’s statements—actually just saying the same thing in different ways—emphasizing that the Fed had no intention of exiting the stimulus immediately, but that it would when economic performance improved. Markets, reassured, recovered partially but not completely. Interest rates remain in a higher range than in early May, as shown in the following chart. 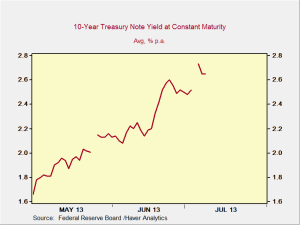 As for the actual meeting minutes, which were released yesterday, what’s there is pretty much exactly what Bernanke said in his press conference in June and his colleagues reiterated. Some Fed members are looking to pull back sooner than others, but it’s all data-dependent. Bernanke put that out again yesterday in a Q&A session after his speech at the National Bureau of Economic Research.

So, if any pullback is data-dependent, let’s look at what the data is likely to suggest over the next couple of months. While growth is expected to pick up later in the year, it’s looking like the second quarter will post much slower growth than expected, largely due to the sequester spending cuts. Those same spending cuts may have continuing effects—we don’t know yet. Employment is growing, but the U-3 unemployment rate remained unchanged even with the recent strong jobs gains. Mortgage rates are up, although they remain cheap historically.

Looking at this through the prism of the Federal Reserve Board, it’s not clear to me that the economy is strong enough to warrant a pullback at this point. Bernanke actually seemed to be trying to make that point yesterday as well. He’s aware that, in the Great Depression, the Fed caused damage by pulling back too early, and he’s unwilling to repeat that mistake. This brings up another point: while many Fed participants may be considering pulling back, the most influential ones—Bernanke himself, Janet Yellen, and others—are much more likely to support continuing the existing policy until there’s much less doubt about the recovery.

Finally, although it’s not being generally reported, several risk factors are due to hit at the end of the summer, right around the time many people are saying the Fed will start to dial back its bond purchases. I expect the debt ceiling debate, which will happen in late summer or early fall, to be fully as disruptive and ugly this time as it was last time. Europe is far from resolved, and, with German elections pending in September and a likely need to bail out Portugal, this will ratchet up the fear index. Finally, the prospect of a Chinese hard landing is looking more and more possible.

With all of these factors converging around the same time, I doubt very much the Fed will want to risk a repeat of the past month by dialing back its bond purchases in September. Much more likely will be a continuation of the existing purchase plan—unless the economy unambiguously signals that growth and employment have shifted up. With that extended time frame in mind, it’s therefore quite possible that the current move upward in interest rates may be reversed, and rates may drift down again.