There are many driving factors behind the potential crisis in student loans, but one of the largest is the increase in the cost of college over the past couple of decades. It’s difficult to derive the actual statistics from the data, but several datasets I reviewed show that the college education inflation rate is between 150 percent and 200 percent of the base price inflation rate. Financial planning courses suggest planners use a similar ratio.

In a previous post, I talked about why service industries, such as medicine and education, are much more difficult to scale. Inputs—doctors and teachers—become less effective with scale, which means that costs go up with size. That’s why medical and educational expenses increase faster than overall prices.

Yesterday, I focused on the decrease in the rate of health care cost growth, noting a downward-sloping trend. It came as a surprise to find exactly the same sort of trend in education, as you can see below. The chart comes from the Commonfund Institute’s 2012 Higher Education Price Index. 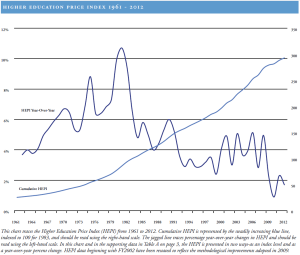 The consistency of the two indicators over time suggests there might well be a common factor—most probably, technology. For all of the worry about rising education expenses, it appears that market pressures are forcing colleges to moderate their cost increases.

One of the things that has allowed college costs to balloon has been the availability of loans guaranteed by the government. The rising costs of such loans, combined with growing public awareness of the burden they can present, have made students—that is, consumers—more price-conscious, even as the financial crisis made them much less able to pay directly. You can see the significant drop in education inflation in 2009–2010, as the financial crisis deepened.

Which brings us to the problem of scale. If we have to reduce costs but don’t have a scalable process, what can we do? The answer, of course, is to figure out a way to use technology to scale processes that previously weren’t scalable.

That leads us to one of today’s most talked-about trends—online courses. Many schools now accept online courses for credit. If you google “credit for online courses,” you can find courses from the University of Texas, Ohio State University, and Yale, among others. (When Yale gets on board, you can assume the trend has some force.) Adoption of online classrooms is also being widely discussed at other universities. Indeed, MIT took the lead some time ago in making its courses available online, and Stanford faculty have launched www.coursera.org.

Meanwhile, online learning is starting to hit the mainstream. One of my friends and two of my colleagues are now enrolled in online programs—and I’m not a particularly tech-savvy person, as my colleagues will attest. I wrote last year that I knew solar was hitting the mainstream when a group of Massachusetts clients started arguing about which program was better. I feel we’re now close to the same place with online education.

As with medicine, we are now potentially at a change point where technology has become sufficiently integrated into society and into schools to dramatically affect both cost and availability. Unlike with medicine, where there are significant economic actors with an interest in retarding change, education—particularly MIT—has actually led its own change process. With the continuing evolution of technology, and increasing cost pressure, we can expect this trend to accelerate.

The benefits of scaling include lower costs and wider availability. We have seen this with manufacturing, cars, and computers. We’ve also seen it with information, with the Web providing more information at a lower cost than would have been feasible before. As education starts to scale, we can expect to see the same kind of expansion—which will be good for society as a whole.