Probably the most important industry in America, for many reasons, is health care. As a percentage of the economy, as a growth sector, and, of course, as a key to people’s health, this industry touches everyone in multiple ways. It is so central, in fact, that many would deny it’s an industry at all. Doctors refer to themselves, as they should, as professionals serving patients, not the economy.

But health care is an industry, and it does take money; as such, what happens here affects the country as a whole. Precisely because it’s been seen as something beyond economics, health care has been more or less exempt from the contractionary forces operating on the rest of the economy.

Until recently, that is. The chart below shows that, for more than the past 40 years, health care costs have never declined. Never—until just recently. 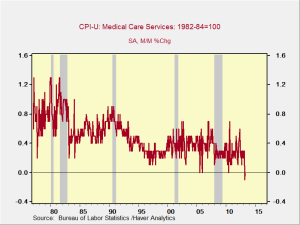 I find this interesting because it points to a possible structural change in the market. Note that health care costs did not decline in any of the previous recessions during that period (the shaded areas). They came close in the mid-2000s and again after the financial crisis, but they never crossed into negative territory. Recessions clearly haven’t stopped the growth of health care costs.

The fact that they’ve declined now, even if only for one month, suggests this may be just a statistical anomaly, which remains the most likely explanation. Looking at it over a longer time frame, though, we see a downward-sloping trend, which suggests the possibility this isn’t a one-off.

Obviously, only time will tell if health care cost inflation has actually downshifted, but it’s worthwhile to think about why that might be. The first factor could be that information technology has started to make health care more efficient. As I mentioned on Friday, it typically takes decades for these effects to show up—and we’re about due—so this is certainly possible.

A related factor may be that many of the major costly medical technologies have already been bought, so the costs of new equipment have dropped. Remember, we’re looking at the rate of change here, so once a technology—CAT scans, for example—gets incorporated in the mix, it doesn’t reflect any further increases unless something else changes. Fewer upgrades in equipment or testing won’t reduce costs, but it will make them grow more slowly.

Undoubtedly, another factor is that consumers are being directly affected by costs. Today’s New York Times, for instance, has a front-page article about a woman who is trying to negotiate maternity care costs. The front page of the Wall Street Journal discusses how individual health insurance plan rates will soar for the healthy under Obamacare. Historically, health care has not been a market—there’s been no consumer incentive to contain costs. That now appears to be changing.

Finally, within health care itself, more attention is being paid to best practices and cost-benefit analyses. This is distinct from point one (that technology helps make current practices more efficient) in that it promotes changing current practices to those that produce better results.

All of these factors appear to be real, and it’s certainly possible that, in aggregate, they have moderated health care cost growth and may even reduce it on a sustained basis.

This is important, as Medicare remains one of the key budget busters over the next couple of decades; it really is a time bomb. I’ve written about this extensively and won’t revisit it now, but if health care cost growth rates have been permanently lowered—even if costs don’t, in fact, decline—it could be a key contributor to balancing the budget in the future.