There have been two big stories in the markets recently: rising interest rates and stock market volatility. I think these two themes are actually connected by a deeper factor—the reemergence of price discovery in the financial markets—and it is that we should be focusing on, as the underlying story will drive future developments.

Let’s start with interest rates. For years now, the Fed has been manipulating the bond market by buying bonds, to the current extent of almost $1 trillion per year. Because the Fed has been buying the majority of new Treasury bonds issued, as well as a significant share of mortgage bonds, other buyers have been forced to compete for the remainder, pushing yields down. This has been exactly what the Fed wants. The problem is that, since the Fed dominates the market, there is no real price discovery. We don’t know exactly what rates would be in the absence of the Fed purchases.

I would argue that the recent increase in interest rates reflects the start of a reemergence of real price discovery in the bond markets. To try to determine what’s going on, I analyzed Treasury rates on a constant-maturity, daily basis. Let’s look at short-term rates first. 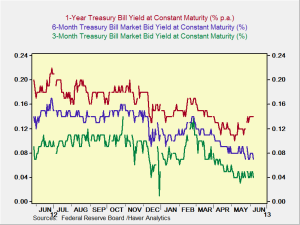 Given that the Fed has most control over the short end of the curve, it makes sense that price discovery would not have reemerged here and that rates would still be low—and that’s exactly what we see. The fact that the 12-month T-bill has started to show an increase suggests that, for longer-term bonds, the Fed’s influence begins to wane.

Longer-term rates look quite a bit different, supporting that hypothesis, as shown in the next graph. 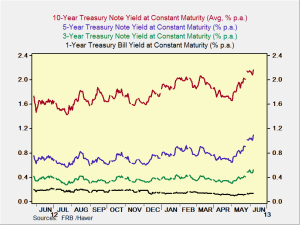 The longer the term, the greater the increase in rates, with the 3-, 5-, and 10-year showing proportionately greater increases, and all three showing gaps up.

What is going on here? The proximate cause is Ben Bernanke’s suggestion in a press conference in late May that the Federal Reserve might reduce its bond-buying program earlier than had been thought. The transmission mechanism of that comment to the longer-term rates is the interesting part.

By stating that it was actively considering reducing its purchases, the Fed introduced much more uncertainty into the pricing equation than was immediately apparent. As I noted above, with the current Fed buying program, we don’t actually know what interest rates would be otherwise. And, since we don’t know what rates would be without the Fed, we can’t know what rates will be when the Fed starts to pull back. The obvious reaction to this pricing uncertainty from other buyers is to be cautious, and to pay less for bonds, forcing rates up. This is exactly what we have seen.

The difference in the short- and long-term responses also makes sense in this context. Shorter-term bonds can be rolled over, and you don’t have the long-term risk, so there is less need for buyer caution. The Fed has also been concentrating its purchases at the longer end, which means any reduction will hit there hardest. Furthermore, the Fed has least control of rates at the longer end of the curve, meaning that, as price discovery starts to work again, it should show up there first.

All three of these factors suggest that, with the Fed’s intimation of an exit, price discovery will start to take over at the longer end of the curve and that interest rates will increasingly be left to the market. Tomorrow, I’ll talk about what this means for interest rates going forward, as well as how it extends to recent stock market volatility.

Treasury bills are guaranteed by the U.S. government as to the timely payment of principal and interest, and if held to maturity, offer a fixed rate of return and fixed principal value. U.S. Treasury bills do not eliminate market risk. The purchase of bonds is subject to availability and market conditions. There is an inverse relationship between the price of bonds and the yield: when price goes up, yield goes down, and vice versa. Market risk is a consideration if sold or redeemed prior to maturity. Some bonds have call features that may affect income.