6/6/13 – Should Investors Worry About a Student Loan Debt Crisis?

Every so often, articles surface about the rising level of student loan debt and the risk it poses to the economy. The implication is often that the crisis brought on by excessive mortgage lending could be echoed by a similar crash in education-related debt. To examine these claims, let’s first look at some scary figures surrounding student loan debt.

According to the New York Federal Reserve: 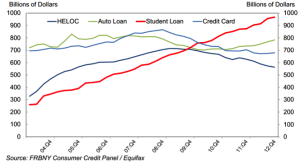 Clearly, we have seen a very significant increase in student loan usage over a relatively short time frame. But the question remains as to whether this will inevitably lead to a systemic crisis. At this point, despite the somewhat startling statistics, our sense is that a crisis is not imminent. High levels of student debt do, however, have the potential to drag on economic growth if the current trend continues.

Why aren’t we worried? Despite its fast growth, total student loan debt remains just a fraction of mortgage debt outstanding. It is also more difficult to permanently default on student loans than on mortgages because the federal government has the right to garnish up to 15 percent of a borrower’s wages and other income to cover payments. Finally, 85 percent of student loan debt is held by the government. This is a much different scenario from the parsing, packaging, and public resale of mortgages that precipitated the 2008 crisis.

As noted, though, there is potential for student loans to create an economic drag. First-time home buyers are typically important marginal contributors to housing market recoveries. According to Bloomberg, individuals in the 25–34 age group made up just 27 percent of all home buyers in 2011, a significant step below the 33-percent share of the market they enjoyed in 2001. With more student debt to pay off, newly minted graduates may be less likely to jump into the economically stimulative housing market.

Yet, there are also positive aspects to the rise in student debt that sometimes go ignored—namely, the higher levels of education that these loans facilitate. The average student debt per borrower is currently $25,000. This is not an insurmountable obstacle, even for individuals who are just starting out in the working world. Meanwhile, college graduates currently earn nearly twice as much as high school graduates, according to the New York Fed. Perhaps even more impressive, the unemployment rate for those who graduated with a bachelor’s degree or higher is just 3.8 percent, while those with only a high school diploma face a 7.6-percent unemployment rate.

The conclusion here is that excessive student loan borrowing is likely to be a major problem—for a small portion of the population. Those who took out too many loans relative to their expected future salaries, those who dropped out of school without a degree, and those who cannot find employment after graduation are likely to be acutely affected. On the other hand, a systemic crisis seems improbable at this point. Indeed, the benefits of additional education may prove to outweigh the costs from the perspective of the broader economy.