What we were talking about yesterday was the “inside view” of the market. As defined by Daniel Kahneman, the inside view builds up from details and is based on inside knowledge of a situation. Detailed analysis is invaluable, of course, but details can often be used to support our initial biases rather than what’s actually happening.

It is also usually worthwhile to consider the “outside view,” where we simply examine what has happened in the past, without considering the details or why things might be different this time. This bigger-picture view limits the extent to which our biases can influence the conclusions.

The euro offers a good example of the inside/outside difference in viewpoint. From the inside, looking at the politics of the various countries, the commitment of the elites, and the violent history of the 20th century, the euro currency union looks not only sustainable but necessary. This was and is the view that European governments take as they swear the euro is unbreakable. From the outside, however, every single multi-country currency union has eventually failed. We will see, but the outside view is looking more credible.

Returning to stock market returns, taking the outside view means looking at how market valuation levels have changed with different growth rates. A good source for this type of analysis is Crestmont Research, where Ed Easterling has been a pioneer. The charts below show his results; the originals can be found at www.crestmontresearch.com/docs/Article-Game-Changer.pdf. 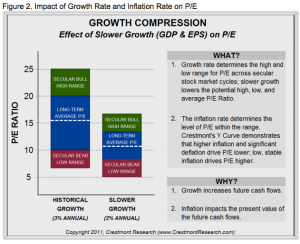 As you can see, and as you would fundamentally expect, slower growth results in lower P/E ratios. This graph makes the same point: 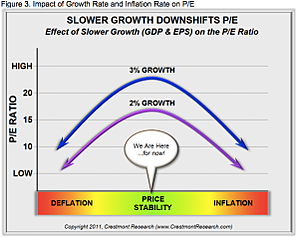 It also shows that, if inflation takes off—which, to some extent, the Fed has explicitly committed to—the P/E ratio will also potentially decline further.

The outside view clearly suggests that slower growth will result in lower equilibrium values. Further, it suggests that the idea that market valuations are now “normal” may need further consideration. Normal may be lower now than it was in the past, and the market may well be more overvalued than current metrics indicate.

The final way to take the outside view is to look at returns going forward by initial valuation levels. If investors pay more for higher expected future growth, and the growth does not materialize, then actual returns should be lower for higher initial values. This is exactly what we see in this chart from AQR: 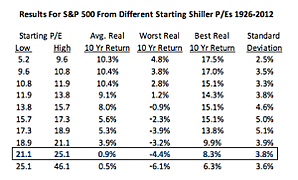 As you can see, the higher the initial valuation level—the box is where we are right now—the lower the future returns.

I am generally skeptical of individual indicators in economics or investing, but when a multitude of views based on different factors all line up to suggest the same conclusion, I have to think it’s worth considering.

The clear conclusion here is that future equity returns are likely to be lower than they have been in the past. This doesn’t mean we can’t make money in the market. It does mean that we may need a different approach, and we’ll definitely need different expectations. Failing to plan is planning to fail, after all, and I would much rather have lower expectations that are exceeded than the reverse.