Yesterday, I was asked to respond to an article on the views of Peter Schiff that appeared on the website Moneymorning.com. I’ve written a couple of these responses, and I think it makes sense to keep addressing questions as they come up, as many of these issues are worth a look on their own merits. The headline of the piece in question reads, “2/3 of America to Lose Everything Because of This Crisis.” If that’s true, it certainly deserves at least one blog post, right?

I’m familiar with Mr. Schiff’s views, as he’s a regular poster on various financial websites that I read. He also shares his opinions on his own website. His views are well known, and he’s not alone in them.

In summary, he believes that “we are heading for a worse economic crisis than we had in 2007 . . . You’re going to have a collapse in the dollar . . . a huge spike in interest rates.” He blames this on the federal debt and the Fed’s money printing. Eventually, interest rates will rise, tax hikes will be imposed, and programs and entitlements will be cut to the bone.

If you’ve been reading this blog for long, you know that I agree with many of his points. But, as I have written before in this context, I don’t agree that we’re necessarily doomed.

Let’s start with money printing. The Fed has certainly created additional reserves, but for those to actually show up in the economy, banks have to lend, which they haven’t been doing. If you look at the money supply, you see that we’re at about the average level of the past 50 years or so. Not super high, not super low. We’re well below the levels of the 1970s, for example, and we have come down over the past couple of years. 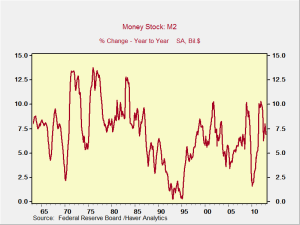 Because of this, it’s no surprise that inflation is contained, as shown in the CPI chart below. In fact, we’ve seen more deflation than inflation over the past couple of years, and the recent trend is down—a major driver of current Fed policies.

So, with the money supply growing at normal rates and inflation under control, what might drive the collapse of the dollar? As I discussed last week, I do not believe the dollar will collapse. Why? First, as noted above, because there’s no economic reason for it to do so. Second, because of the relative strength of the U.S. economy—we’re simply doing better than most countries economically. Third, because of the unparalleled political stability of the U.S. as compared with, say, Europe or China. And fourth, because there is simply no alternative.

After the collapse of the dollar, Schiff talks about a spike in interest rates. Again, as I discussed in a previous post, I don’t see a pending cause for such a spike. Demand continues strong for U.S. Treasuries and, with the recent changes in Japanese monetary policy, can be expected to strengthen considerably. Supply growth continues to drop, suggesting that increasing demand will meet a relative decline in supply. This shouldn’t push interest rates—the price of money—up; it may well push them down. 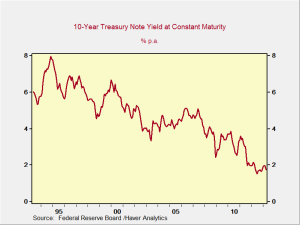 Schiff goes on to say that the Fed’s strategy is unsustainable, noting the lack of an exit strategy. I think the Fed members would agree on the first point—and they’re already talking about exiting. As for how they’ll do so, there are multiple options; the fact that they haven’t disclosed all their plans doesn’t mean they haven’t thought about it. No doubt the exit will be messy, and mistakes will be made, but it is certainly doable.

Finally, Schiff says that, as interest rates rise, stocks will tank and bonds will get hammered. Well, yes. That is how the financial markets work, and it’s exactly what has happened in the past—for example, in the 1980s. You can see in the chart below that we’ve had multiple episodes in which rates went up several percentage points. As best I can tell, though, we’re still here.

Schiff’s last point is that taxes will increase and benefits will be cut. Well, again, yes. That will certainly hurt growth, but it will also solve the problem. To focus solely on the costs, which are real, isn’t realistic, as there are also benefits. I have written about tax increases several times on this blog, most recently yesterday, and cuts in benefit programs as recently as April 11. You may also remember Simpson and Bowles and www.fixthedebt.org, the website they designed to help solve this problem, which I focused on the other day.

On top of these historical and theoretical arguments, the fact that the stock market keeps hitting new highs and that bond yields remain low worldwide suggests that the end of the world is not imminent in the eyes of those who are paid to invest.

None of this is to minimize the validity of the points Schiff raises, many of which I agree with. We have considerable pain ahead of us as we normalize our borrowing and debt levels, and we are suffering some of that pain now as the deficit declines. If we keep on our current path, we will face even more pain, but we’re altering that path even as we speak.

I can’t rule out bad outcomes here. There is certainly a possibility—even a certainty—that, at some point, policy mistakes or simple bad luck will cause potentially significant damage. That, however, is always the case. Compared with the 1960s, when the U.S. was spending to contain the Soviets and faced nuclear war; the early 1970s, when OPEC raised oil prices by multiples and inflation was in double digits; or even the early 1980s, when interest rates were jacked into double digits to kill inflation, we are in pretty good shape.

When you add in the positive factors—such as the oil and gas revolution here in the U.S., our superior demographic profile compared with that of other countries, and even the fact that we are a major food exporter—the situation looks even better.

Yes, we have challenges. Yes, we face risks. That has always been the case, and there is a path to a solution for every single one of them.

This too will pass.