April was another month of strong equity performance. The S&P 500 Index was up 1.93 percent, trailed slightly by the Dow Jones Industrial Average at 1.94 percent and the Nasdaq at 1.88 percent. Technically, markets were robust, with all three indices well above their 50- and 200-day moving averages.

In overseas markets, the MSCI EAFE Index was up 5.19 percent, and the MSCI Emerging Markets Index gained 0.66 percent. Developed international markets were higher as good news came from several sources. Italian politicians elected Enrico Letta, a centrist and supporter of the European Union, their prime minister. Letta’s ascent led investors to buy Italian bonds, pushing the Italian 10-year yield to its lowest level in 30 months. Italian yields are lower now than they were in 2007, before the global financial crisis began (see chart). 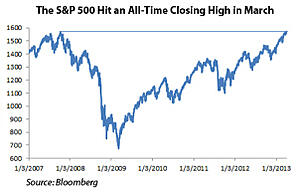 Japan’s central bank announced plans to double that nation’s monetary base in two years and end the deflationary spiral that has plagued Japan for more than a decade. Meanwhile, the European Central Bank was poised to cut rates in early May, a move supportive of stocks and risky bonds.

April was positive for fixed income investors. The Barclays Capital Aggregate Bond Index returned 1.01 percent, and longer-duration bonds performed quite well, as the 10-year U.S. Treasury yield fell, from 1.84 percent to 1.673 percent. Weaker-than-anticipated economic releases, combined with low inflation, reassured investors that the Federal Reserve is unlikely to discontinue its easing program in the near future.

The real U.S. economy showed signs of a slowdown. Only 88,000 jobs were added in April, well below the 268,000 new jobs reported for the month before. Weak durable goods orders also signaled a slowdown, and the reported gross domestic product (GDP) growth of 2.5 percent for the first quarter was below expectations.

Nevertheless, total labor demand stayed strong. According to the Ned Davis Research Group, the number of hours worked has increased at a level equivalent with having added 328,000 more jobs to the workforce. This suggests that overall demand is healthy, but that companies are reluctant to hire.

Consumer demand was vigorous early in the first quarter but slowed toward quarter-end, with a decline in retail sales for March. Housing has been positive for consumers. The S&P/Case-Shiller 20-City Home Price Index recently reported a 9.32-percent gain year-over-year, as prices climbed and demand outstripped supply.

During the first quarter, government spending likely declined 4.2 percent on an annualized basis—or 0.8 percent of GDP—according to Capital Economics. This figure was not inclusive of the sequester cuts, which took full effect in early April.

The economic impact of the sequester cuts is not yet known, but, so far, markets haven’t reacted negatively. In addition, the decrease in government spending is narrowing the deficit, which is projected to come close to stabilizing in 2014.

Risks around the world persist

The European economy stagnated, as several countries struggled to stabilize their banking systems. North Korea kept on rattling its cage, and several countries confirmed Syria’s use of chemical weapons. If chemical weapon use is deemed widespread, this could spur an intervention by the U.S. and its allies. None of these risks appears to pose an imminent threat to markets.

Recovery moves along but at a slower pace

The U.S. economic recovery continues, although the pace looks likely to slow. U.S. corporations also keep posting impressive profits, but future growth may not be as significant. Markets appear to be pricing in an optimistic future, but, if this doesn’t play out, equity market revaluation could lower levels. In short, there are reasons for optimism, but investors should bear in mind their risk tolerance and allocate capital prudently.

The S&P 500 Index is a broad-based measurement of changes in stock market conditions based on the average performance of 500 widely held common stocks. The Dow Jones Industrial Average is a price-weighted average of 30 actively traded blue-chip stocks. The Nasdaq Composite Index measures the performance of all issues listed in the Nasdaq Stock Market, except for rights, warrants, units, and convertible debentures. The MSCI EAFE Index is a float-adjusted market capitalization index designed to measure developed market equity performance, excluding the U.S. and Canada. The MSCI Emerging Markets Index is a market capitalization-weighted index composed of companies representative of the market structure of 26 emerging market countries in Europe, Latin America, and the Pacific Basin. It excludes closed markets and those shares in otherwise free markets that are not purchasable by foreigners. The Barclays Capital Aggregate Bond Index is an unmanaged market value-weighted index representing securities that are SEC-registered, taxable, and dollar-denominated. It covers the U.S. investment-grade fixed-rate bond market, with index components for a combination of the Barclays Capital government and corporate securities, mortgage-backed pass-through securities, and asset-backed securities.