The deficit has dropped off the radar for a bit, what with the agreement to postpone debate about the debt ceiling and the generally improving economy, but recent events make it a good idea to check in and see where we are.

Last time we looked, the deficit was way too high, with no end in sight. You might presume that’s still the case—and you would be right about the first part, but not the second. We’re actually making substantial progress toward getting back to balance, at least in the short term, via both spending cuts and tax increases.

Over the first quarter of this year, government spending contracted by 4.2 percent annualized, according to Capital Economics, which supplied all of the stats herein. Over the past couple of years, real government expenditures have declined by around 7 percent. Looking at history, the only past declines of this magnitude are 11 percent after the Korean War and 7 percent after the Vietnam War ended. The current decline in spending is tied for the second largest since World War II. Taxes also increased with the fiscal cliff deal at the end of last year.

You could argue, and I do, that this is great; we needed to cut spending substantially to reduce the deficit. Well, we have. Breaking out the deficit into structural and cyclical pieces, and using U.S. government figures, the structural part has been reduced from 7 percent of GDP in 2009 to 2.5 percent in 2013. In 2014, it is projected to drop to 1 percent. The IMF’s figures are a bit less encouraging but show the same trend. As a further piece of support, a story in today’s Wall Street Journal notes that the Treasury is actually paying off debt for the first time in six years! It won’t last, but it’s still a positive sign.

We’re not out of the woods yet, as the cyclical component of the deficit, consisting of programs such as unemployment and stimulus spending, is expected to continue at around 2.5 percent of GDP. We’re getting there, however, as this spending should also decline as the economy continues to recover.

In fact, when we consider the recovery, we have to think about the effect the reduction in government spending has had on it. Since 2011, reductions in government spending have, on average, knocked about 0.5 percent off growth per year—which is significant out of 2.5 percent. This year, the sequester spending cuts are expected to reduce growth by about 0.7 percent. The progress in reducing the deficit has been at the cost of slower growth.

The following chart shows the rate of the change in the deficit. Above the line is good, and you can see that we’re spending more and more time there. As painful as it has been, we’re making progress and can expect to begin reaping the rewards in the next couple of years. 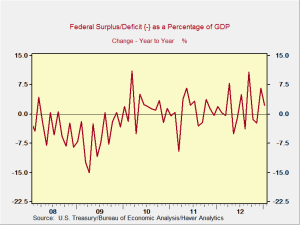