For the past couple of years, we’ve seen a strong first quarter followed by a much weaker second quarter. Initial signs suggest that the pattern may continue this year as well. Should we expect that—and, if so, what would it mean?

First, the good news: the first quarter was very strong. Economists are estimating that growth could have been as strong as 3 percent, which is well above expectations. Private employment continued to grow, with signs of an increasing growth rate over the past year, while government employment recovered somewhat after a tough fourth quarter, as shown in the chart below. 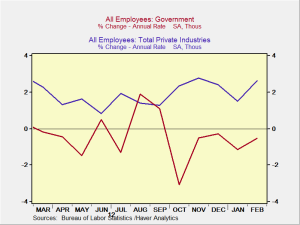 Consumer spending also showed robust growth. Considering its strength in both January and February, in the face of rising gasoline prices as well as the impact of the fiscal cliff tax increases, this is particularly encouraging.

Business surveys reflected strong performance as well, with both the service and manufacturing indices moving well into expansion territory.

Now, the bad news. We’ve seen similar results in the first quarter of previous years, before a second-quarter slowdown. Initial signs are somewhat discouraging. In the past week or two, both of the business surveys have shown declines for the service and manufacturing sectors, although they remain in expansion territory. Employment growth, as reported by payroll-processing firm ADP, came in below expectations and below last month’s figure, although still posting a reasonable gain. Consumer saving is at low levels, which supported spending the first quarter but may not in the second. Finally, the effects of the sequester haven’t shown up yet but will intensify over the next couple of months, possibly creating a dampening effect. Beyond domestic factors, the Cyprus banking crisis has raised substantial uncertainty in the financial markets, which could erode international demand.

Fortunately, everything is relative. Although some slowing does seem to be happening, it is from a high level. Because of that, even a slowing economy may still generate a higher level of growth than we’ve tended to see over the past couple of years.

Moreover, balancing out the negative factors are sustaining positive factors, the most important of which is the recovering housing market. I mentioned the other day that housing is driving increased employment and consumer spending, and the trend shows no sign of reversing. In fact, according to an article in today’s Wall Street Journal, apartment rents appear to be topping, due at least in part to the recovery of buying demand.

The other sustaining factor may well be increased growth in worker income. The hours worked stat has reached a point at which wage growth has accelerated in the past. If the past relationship holds, the additional income would support even more spending growth.

Overall, some slowdown looks very probable. Even so, the level of growth should remain consistent with or above that of the past year and certainly above the level of the last quarter of 2012. The outlook for the year as a whole remains positive, even in the face of the negatives, and a second-quarter slowdown, if it happens, shouldn’t affect that too much.