We’ve hit a record with the Dow and are getting very close with the S&P 500. Excitement is building, and the expectation is that stock prices will continue to rise. They may, for a while, based on the psychology alone, but as I discussed in the CFA Institute post last week, the financial fundamentals have to come into play at some point.

Ultimately, for a market rally to be sustainable, earnings per share—the metric that defines the financial benefit to shareholders—has to increase. The question now is whether the current rally is actually based on increases in earnings and, if so, whether that growth can continue. 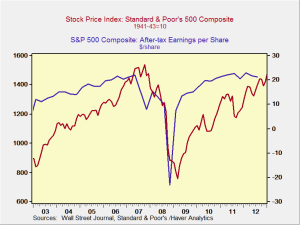 As you can see from the chart, the current rally in stock prices does, in fact, track earnings pretty closely. If you run the comparison back, you get similar results in earlier time periods. The correlation is around 0.5—not great, but indicative. Earnings seem to be a principal factor in stock prices.

This brings us to two related questions. First, will current earnings continue to grow? And second, will earnings per share—the more important metric—continue to grow as well?

First, let’s look at earnings—that is, revenue minus costs. Earnings have grown substantially since the financial crisis, as you can see in the chart, but have rolled over recently. Future earnings growth will depend on top-line growth and keeping costs under control.

For top-line growth, the signs are mixed. The graph below shows that estimated revenues for 2013 have been trending lower; although 2014 estimates are higher, there’s potential for decreases next year as well.

Given top-line stagnation, or limited growth, profit margins would have to increase to grow earnings, and the news there isn’t good either. This chart shows declining expectations for both 2013 and 2014.

Beyond the expectations, we can also look at fundamentals. Examining the composition of the current record-high profit margins, analyst David Rosenberg at Gluskin Sheff came up with a decrease in interest expenses and tax effects of $30 per share from 2007 to the present. If you subtract that from current earnings, we’re nowhere near a record level of earnings, despite the record stock prices. That’s not to say that interest levels or debt expenses will spike, but we won’t see the same kind of tailwind going forward, as much of the corporate refinancing is already done.

Vadim Zlotnikov at AllianceBernstein did a similar analysis and came to similar conclusions, but with an additional factor—lower depreciation expenses. This also looks sustainable; however, with capital expenditures very low compared with historical levels, at some point there should be catch-up, which will lead to higher depreciation levels and adversely impact profit margins.

Beyond these factors, a universal driver of improved profitability and higher profit margins is improved productivity—doing more with the same resources. Productivity has also been a major driver of the growth in earnings over the past several years, as shown in the chart below. 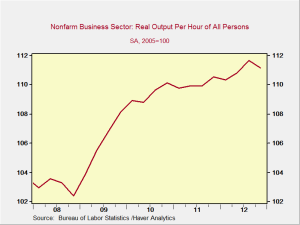 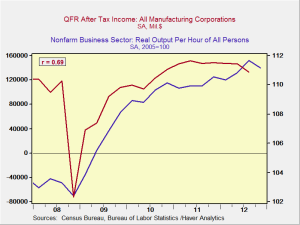 Going forward, the takeaway is this: The major factors that have allowed profit margins and earnings to grow at the rate they have—higher labor productivity, corporate refinancing at lower interest rates, tax effects, and lower capital expenditures leading to lower depreciation expenses—are largely behind us now. Without these tailwinds, future growth in profit margins and earnings may well be less than what we’ve seen over the past couple of years.

What this means for the stock market depends on how companies manage the translation of earnings into earnings per share, which they can do with stock buybacks. We’ll discuss that next.