We talked about taxes the other day, and why I think things are actually better than they seem on the surface. Experiments are underway in the states, and Congress genuinely appears to recognize that we need to restructure the tax code. Things are moving, even if it doesn’t always seem that way.

It’s a similar story with spending. The deficit as a percentage of GDP has actually declined significantly over the past three years or so. As with employment, we’re still not anywhere close to where we need to be, but the trend is in the right direction.

What we have here, though, is something of a mathematical trick. Not an unfair one, but definitely a bit of sleight of hand. If GDP grows, spending can grow as well and still decrease as a percentage of GDP, provided that spending grows more slowly than the economy as a whole.

What we see above is a combination of the two effects. The economy is growing again, so tax receipts are increasing, and spending is stabilized in dollar terms, as shown in the chart below. You can see that there’s still a huge gap here, but at least it’s narrowing. 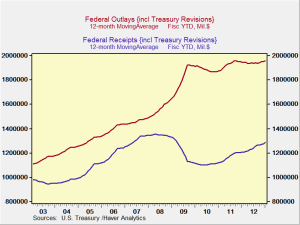 If we look at the spending details in absolute dollars, though, instead of as a percentage of GDP, we find that, overall, spending has about leveled off. Many categories of spending have flattened out or even declined, including defense spending. Two categories, however, are constantly increasing and have prevented federal spending from declining overall: social security and Medicare, as shown below.

The problem is actually worse than the chart above suggests, as we’re losing relative income at the same time that the expense increases. When we match social security expenses and income from employment taxes, we see that, if you net it out, we’ve had a much larger operating deficit in the past than anyone admits. The excess social security tax receipts covered up the deficit, but now that spending matches the receipts, we no longer have that excess. The problem will get worse going forward, as the baby boom generation ages into retirement. 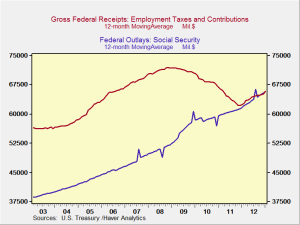 What can we take away from all of these charts? The deficit spending problem is, in fact, moving in the right direction. Any real solution, though, will require that the two biggest contributors to rising spending, social security and Medicare, be reined in. Moreover, we know that, even if we do get social security under control, we have lost the cushion of excess tax income, and it’s not coming back.

The upshot here is that, given a pie of a constant size, we cannot keep growing spending at current rates, and social security and Medicare are the biggest contributors to that. The problem can’t be solved by raising taxes either—think of the size of the gap. Spending cuts that don’t address either of the big two, along with defense, are essentially kidding the people who propose them.

The real solution would be to grow the pie. In fact, unless we plan to cut spending dramatically, growth is the only solution. We’ll talk about that next.