and tagged Fiscal Cliff, Market Updates, Politics and the Economy

Despite the dire warnings, the sun rose today and people went to work. Planning shifted, if it hadn’t already, from avoiding the sequester’s spending cuts to implementing them. Entrepreneurs launched t-shirts and tchotchkes based the sequester and furlough.

Politicians, who had been warning of the disastrous consequences of the spending cuts, haven’t exactly backed off. Instead, they’ve adjusted the time frame—much like the doctor who had given his patient six months to live but then granted him an extension when he couldn’t pay off the bill during that time.

I’m encouraged by the fact that, in the past couple of months, we’ve actually implemented real tax increases and real spending cuts. This is doable. Not easily, and not without a tremendous amount of drama, but it gets done. Kind of like bedtime for my four-year-old son.

Will there be some pain? Of course, and I’m not minimizing it. Many federal workers will take large effective pay cuts. Other programs will be cut. Just as with the tax increases, for the people who need that pay or those programs, there will be pain.

There will also be pain at the level of the economy. It’s estimated that the sequester spending cuts will reduce growth by about 0.5 percent. Given expected growth, this should be absorbable, but it will be a headwind.

The fact is, though, that something had (and still has) to be done. You can see the progress that’s been made so far on the following chart. While the deficit remains, the line is sloping up, suggesting that we’re making headway—that is, the deficit is getting smaller. 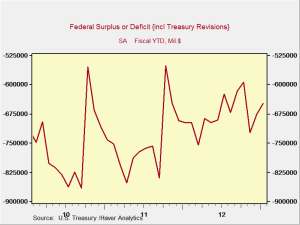 Unfortunately, we still have a big deficit, which means more spending cuts and tax increases (or both) are needed.

The deal on taxes and the sequester’s spending cuts are necessary—and there are more coming. In order to balance the budget, or at least reduce the deficit to a level that will remain stable as a percentage of GDP, we need further tax increases and spending cuts that are multiples of what’s been done so far.

You have to start somewhere, and as a process for demonstrating to the public that the world won’t, in fact, end if we raise taxes or cut spending, the fiscal cliff deal and sequester actually have a lot to recommend them. By overhyping the effects of each to their respective constituencies, the parties have cried wolf—multiple times. Perhaps the next round of tax increases and spending cuts will elicit a bit less panic because of it.