The good news keeps trickling in. New unemployment claims ticked down again, continuing a decline that is bringing us closer to the lows of the mid-2000s, as the chart below shows. 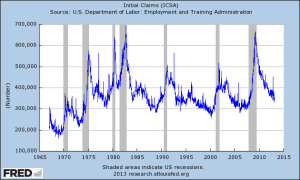 Perhaps as a result, consumer confidence also ticked up, per the University of Michigan. Consumer spending increased at a slower rate for January, at 0.1 percent, but the fact that it increased at all, in the face of a wide tax increase on January 1 that adversely affected incomes, is actually encouraging.

For business, one negative report was that productivity decreased, but the principal reason was that wage income jumped—bad for profit margins, good for consumer spending, which is most of the economy. Industrial surveys are recording significant improvements, suggesting that U.S. manufacturers are recovering from the slump in the rest of the world and that the small declines just reported in industrial production will be reversed in the next couple of months.

On a macro level, the U.S. trade balance is improving, in no small part because of the increased domestic production of oil and natural gas. Even despite that, exports are increasing faster than imports, which will help to grow the economy. These changes, as well as others, should result in last quarter’s small decrease in GDP being revised upward to a gain.

On the government side, state and local governments are seeing recovering tax revenues and are expected to start hiring again in the near future. Capital Economics, a consultancy we use, recently put out a focus piece on how much that sector has improved and how previous cuts should start to be reversed. Briefly, state and local governments comprise 12 percent of GDP and 14 percent of all employees; over the past three years, they have reduced GDP growth by 0.3 percent per year and employment by 580,000. As that reverses, it will have a significant positive effect. Even when offset by cuts in federal spending, the effect should be positive, as state and local governments in aggregate are much larger.

Finally, one of the missing pieces of this recovery has been business confidence, and that may be coming into play as well. In the past week, three mega-deals have been announced: the leveraged buyout of Dell, the merger of American Airlines and US Air, and the Warren Buffett-led purchase of Heinz. Such deals typically depend on confidence, and to see three announced at roughly the same time suggests that, even for large business, the narrative has changed.

None of the signals discussed above is determinative individually, but all of them together further confirm my conclusion that we are in a sustainable recovery. We still have many obstacles to overcome—with Europe and the pending sequester/spending cuts the two most prominent at the moment—but overall, the story remains good and is getting better.