Off to a great start

January got the year off to a great start. The S&P 500 Index was up 5.18 percent, and the Dow Jones Industrial Average climbed 5.91 percent. The perceived successful resolution of the fiscal cliff sparked the best January market performance since 1997. The beaten-down energy sector led markets upward, while the technology sector lagged. The S&P 500 ended the month only about 2 percent below its 2007 peak, having posted double-digit returns in three of the past four years.

The strong market action continued on good corporate earnings data and in spite of mildly disappointing revenue results. As of the most recent data, 71 percent of S&P 500 companies beat earnings expectations in the fourth quarter of 2012, but only 43 percent beat on revenues. Since late 2009, when nearly 80 percent of companies beat earnings estimates, the trend has been downward. According to Bloomberg, only 64 percent of companies beat in the third quarter. So the possible rebound to 71 percent may be another reason why investors have been optimistic.

Technically, equity markets show signs of continued strength. The S&P 500 remains above both its 50- and 200-day moving averages and briefly crossed a key price level of 1,500. Other technical market factors are also positive. The strong performance of the Dow Jones Transportation Average and the breadth of stock price appreciation suggest that bullish investors are enjoying significant momentum.

Developed international markets beat U.S. markets, but emerging markets lagged. The MSCI EAFE Index rose 5.27 percent, and the MSCI Emerging Markets Index returned 1.31 percent on a price basis for the month. Given the diversity of markets and economies included in these indices, it is difficult to draw general conclusions. It does appear, however, that continued economic recovery and the reduction in political uncertainty have made the U.S. and developed markets relatively more attractive.

Value stocks outperformed growth stocks across the globe, and European peripheral countries such as Italy and Portugal were top performers. Analysts expect European gross domestic product (GDP) to contract 0.1 percent in 2013, but investor spirits continue to be buoyed by the European Central Bank’s pledge to buy sovereign debt if necessary.

Technically, the MSCI EAFE and Emerging Markets indices remain above their 50- and 200-day moving averages, though the emerging markets benchmark is getting close to its 50-day, suggesting an erosion of investor confidence.

Bonds lost ground over the month, as investors moved out of lower-risk assets. The Barclays Capital Aggregate Bond Index declined 0.7 percent. Both Treasuries and investment-grade corporates sold off. Only municipals and high-yield posted positive performance. The Barclays Capital U.S. Corporate High Yield Index returned 1.34 percent. Yields have risen year-to-date. The 10-year Treasury began January at 1.75 percent; by month-end, it had increased to 1.98 percent. Though still extremely low, Treasury yields are at their highest levels since last April (see chart). 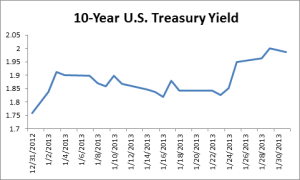 Signs of life in the U.S. economy

On the whole, economic data was positive in the first month of the new year. Most notably, employment continued its slow but steady recovery, adding 155,000 jobs for December, which left the unemployment rate unchanged at 7.8 percent. Retail sales continued to grow, and housing continued to improve, with prices increasing even as the supply of homes for sale dropped to multiyear lows.

Results for the fourth quarter of last year, released in January, were also positive. Consumer spending, which is about two-thirds of the economy, was up 2.2 percent—an acceleration over the previous quarter’s figure of 1.6 percent. This took place despite the dual headwinds of Hurricane Sandy and the fiscal cliff. Business investment, which had been a piece missing from the recovery, increased 8.4 percent, more than reversing its 1.8-percent decline in the third quarter. Finally, residential investment popped by more than 15 percent, as a result of the housing recovery.

Negatives for the month included a drop in consumer confidence, which seemed driven by the tax increases in the fiscal cliff deal, and a surprising end-of-month report that the economy had contracted 0.1 percent in the fourth quarter of 2012. The decline was due to three official factors: weak inventory spending, a decrease in net exports, and the largest drop in defense spending in 40 years. So the basis for this anomaly appears to have been a mix of one-time factors, seasonal adjustments, and revisions.

Fourth-quarter 2012 GDP, despite being unexpectedly feeble, does not seem to represent a substantial long-term weakening of the economy. The biggest risk is that the headline might shake consumer confidence. For last year as a whole, GDP grew 2.2 percent, up from 1.8 percent in 2011. The recovery, while slow, continues to strengthen in spite of the occasional statistical blip. In summary, this doesn’t appear to be the start of a new recession.

The fiscal cliff deal at the start of 2013 made the Bush tax cuts permanent for the majority of the population, but the expiration of the payroll tax waiver meant that everyone saw his or her taxes increase anyway. Lower paychecks led to reduced consumer confidence early in the month. Meanwhile, politicians failed to address expenditures, putting off sequester spending cuts for two months and leaving substantial political uncertainty in place.

Another source of uncertainty, the debt ceiling, was postponed, as Congress agreed to raise the ceiling for the next couple months while budgets are negotiated. Again, nothing has actually been settled, but the decision to negotiate rather than issue ultimatums was rightly seen by the markets as a positive step.

In the face of persistent uncertainty and still elevated unemployment, the Federal Reserve (Fed) maintained its support of the markets by continuing to buy about $85 billion per month of Treasuries and mortgage securities, a rate of about $1 trillion per year. At this point, the Fed is buying a very large proportion of the new securities issued. There is speculation that this intervention could end sometime in 2013, although it will depend on the health of the economy.

From the perspective of equity market performance, the beginning of 2013 has mirrored the start of 2012. While political and economic concerns remain, a sustainable economic recovery appears well under way. The housing market should continue to improve, and there are reasons to believe that employment growth may accelerate.

In the U.S., government spending is the biggest item to watch, as cuts appear increasingly likely. Nevertheless, the overall signs for the U.S. economy and markets are generally positive. Investors should take the opportunity to celebrate the strong returns of the past few years while they maintain the allocations necessary to achieve their long-term goals.

Disclosure: Certain sections of this commentary contain forward-looking statements that are based on our reasonable expectations, estimates, projections, and assumptions. Forward-looking statements are not guarantees of future performance and involve certain risks and uncertainties, which are difficult to predict. Past performance is not indicative of future results. Diversification does not assure a profit or protect against loss in declining markets. All indices are unmanaged and investors cannot invest directly into an index. The Dow Jones Industrial Average is a price-weighted average of 30 actively traded blue-chip stocks. The S&P 500 Index is a broad-based measurement of changes in stock market conditions based on the average performance of 500 widely held common stocks. The Dow Jones Transportation Average is a price-weighted average of 20 U.S. transportation stocks. The average as it is known today began on October 26, 1986. It was formerly known as the Dow Jones Railroad Average. The MSCI EAFE Index is a float-adjusted market capitalization index designed to measure developed market equity performance, excluding the U.S. and Canada. The MSCI Emerging Markets Index is a market capitalization-weighted index composed of companies representative of the market structure of 26 emerging market countries in Europe, Latin America, and the Pacific Basin. It excludes closed markets and those shares in otherwise free markets that are not purchasable by foreigners. The Barclays Capital Aggregate Bond Index is an unmanaged market value-weighted index representing securities that are SEC-registered, taxable, and dollar-denominated. It covers the U.S. investment-grade fixed-rate bond market, with index components for a combination of the Barclays Capital government and corporate securities, mortgage-backed pass-through securities, and asset-backed securities. The Barclays Capital U.S. Corporate High Yield Index covers the USD-denominated, non-investment-grade, fixed-rate, taxable corporate bond market. Securities are classified as high-yield if the middle rating of Moody’s, Fitch, and S&P is Ba1/BB+/BB+ or below.