A popular talking point these days is that the deficit over the past several years has been the worst since World War II. That’s absolutely true, as you can see from the chart below, but the statement misses a key point. 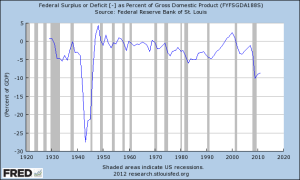 The key point is that, in every recession since WWII, we’ve run a deficit, and in each case, it was either the worst or close to the worst since then. Note the downward slope of the line above, and extend it to the present. Given the magnitude of the crisis we’re emerging from, the deficits we ran were appropriate given past behavior.

Of course, this leaves out the accumulating debt, which is close to a point where it cannot be expanded. If you look at what the Fed and the U.S. government have done over time, and in the most recent crisis, you see that they’re very close to their limit. The Fed, in particular, is just about out of tricks. The accumulated debt means that the old playbook, of borrowing and spending to cushion the economy during a recession, many no longer be possible, at least not to anything like the same extent.

What could this big change mean for the economy going forward?

Let’s set aside the immediate issues—the deficit and the political battles—and consider the next 20 years rather than the next 3 months. If the economy has lost a moderating influence, what does that mean?

First of all, the swings maybe sharper and quite possibly larger. Absent a cushion of government spending and Fed rate cuts, recessions may have to work themselves out. There could be more bankruptcies, higher unemployment, and more economic pain in general. We can see this by looking at the past.

In the 1950s, we had two or three recessions, depending on how you count them. In the 1960s, we had zero or one, largely because of government spending on the Vietnam War. In the 1970s, there were three, as government support hit its limit in the face of inflation and the oil shock. And the 1980s and 1990s had just one each, as Alan Greenspan’s Fed stepped in whenever the economy looked soft.

If you look at the 20 years from 1987 to 2007, for example, there was relatively little economic pain, despite a real estate crash in the early 1990s, which barely led to a recession, and the tech crash in 2000, which also barely led to a recession. The 2000s in particular were cushioned by low interest rates and spending driven by mortgage equity withdrawals. Prior to 2008, the last real recession we had was in the early 1980s. That era is over.

In fact, as the chart above shows, starting in around 1985, the magnitude of recessions declined significantly—until 2008. Like it or not, we may be going back to the future with more frequent and worse recessions, as in the 1950s and 1970s, when the government either could not or did not step in as frequently.

Given the change in the macroeconomic landscape, investors need to consider their assumptions. Greater economic volatility will almost certainly lead to greater volatility in the equity markets. Lower growth rates (which I will discuss next week) may imply that, over time, growth will not compensate for that greater volatility, leading to lower returns on both an absolute and risk-adjusted basis. Worst case, it is worthwhile to look at Japan to see how its economy and financial markets reacted over the past 20 years, as the country dealt with similar dynamics.

To say it’s different this time is to dodge the question. The real question is, Where can we look for guidance? The answer now isn’t the past 20 years, but the times before that when government didn’t step in. I suggest that, as investors and advisors, we examine those times and see what we can learn from them.