As I’ve been talking about the housing recovery for some time, I thought it would be worth giving it a more detailed look. I don’t intend to get very quantitative here, but there are a number of charts that illustrate just how far we’ve come. First, let’s take a look at housing affordability. 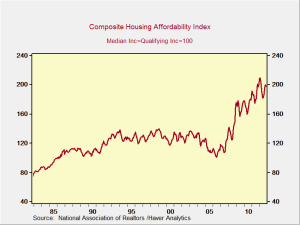 Housing is not as affordable as it has been in the past 30 years—that was last year—but it is pretty darn close. For all the psychic shock of recent price declines, given a down payment and a lender, there is no financial reason not to buy. While those are two pretty big conditions, the reality is that they’ve always been there; this is back to the future. With rents rising rapidly, people also have a large incentive to save and clean up their credit reports. 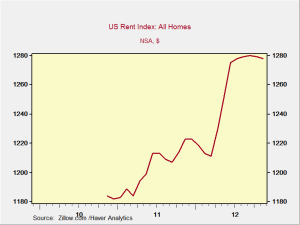 This is a short data series and, as such, is somewhat questionable, but the big picture is clear: Rents are up, by a lot. Anecdotal evidence supports this, with several articles on rising apartment rents in the Wall Street Journal alone over the past couple of weeks. Even though there is a short-term top, which is reasonable given that few people move in the winter, the trend is clearly up and can be expected to continue, as rental vacancy rates are dropping. 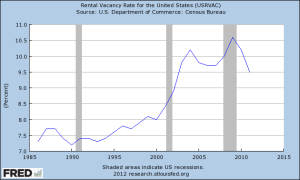 Given rising rental rates and declining vacancy rates, the incentive to buy instead of rent won’t be getting smaller anytime soon, and the market reflects this. There are several data series for housing prices, and I have graphed two here: 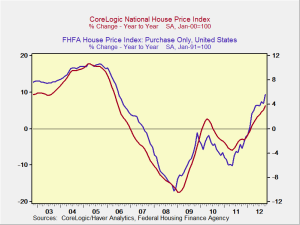 Note how this graph is set up, showing the change in prices from the previous year. That change has moved positive and continues to climb; prices are rising and doing so at an increasing rate. This is the sign of a market that will likely continue to strengthen.

What is driving this? As with any market, supply and demand. Demand, in the form of sales of existing homes, is rising. You’ll notice on the chart below that the rate of price increase is pretty similar to that of the early to mid-2000s. This could mean that another bubble is forming, but note that affordability is still much higher than at that time; also, the rate of sales increase is either rising or stable. Further, prices are nowhere near previous peaks even in nominal terms, much less in real terms. This means that, while households couldn’t afford the homes they bought in the mid-2000s, they can afford the houses they are buying now, reducing the chance of a bubble. 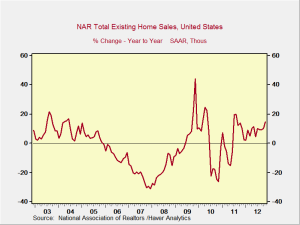 Another supporting indicator is that new home sales and prices are increasing along with those of existing homes, as shown below. In fact, both are not only increasing but doing so at increasing rates. This is important because existing homes have had a strong price advantage in a weak market. If new homes are performing well, that price advantage must have largely gone away, suggesting that the market really has recovered. 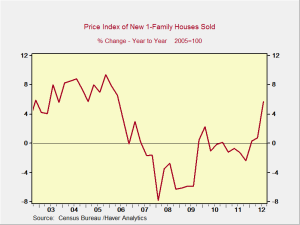 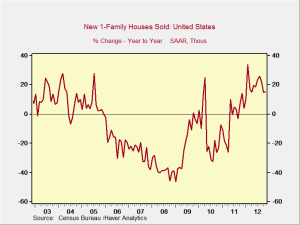 The final sign of recovery is the supply of homes on the market. As you can see below, the supply is dropping at double-digit rates, indicating that excess supply is being absorbed quickly. Less supply, combined with greater demand, indicates that prices can reasonably be expected to continue rising. 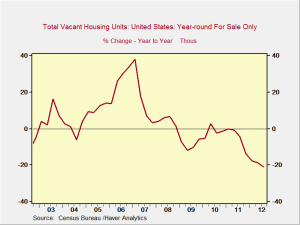 Overall, with houses affordable, prices and rents rising, and supply declining, I expect the housing recovery to continue, to the benefit of the economy as a whole. “Never bet against the American consumer” has been a good guideline for many years, and we are learning that the same applies to the American homebuyer.