One of the wonderful things about the digital age is the emergence of mash-ups, where people combine elements of existing art in new ways. The idea has been around for decades, of course, but the Internet and digital technology have made it even easier to create and distribute.

Two of the more absurd mash-ups in the cartoon realm are Garfield Minus Garfield, “a site dedicated to removing Garfield from the Garfield comic strips in order to reveal the existential angst of a certain young Mr. Jon Arbuckle,” and Nietzsche Family Circus, which pairs Family Circus cartoons with Friedrich Nietzsche quotations. 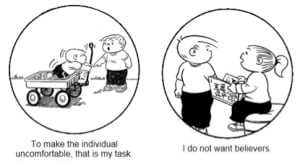 Why do I bring this up? I once got a pairing of Billy and Jeffy staring into a television screen with the caption “. . . if you gaze into the abyss, the abyss also gazes into you”—a thought that seems appropriate to the pending debt ceiling debate.

According to an article today on Politico, “Double trouble: House GOP eyes default, shutdown,” more than half of the Republicans in the House are willing to default, and many more would be willing to shut down the government in order to force spending cuts. As a reminder, we will hit the debt limit at some point in mid-February to early March, when the Treasury won’t be able to pay all of the bills coming due, and the law funding the government expires March 27.

The principal point of the article is that House Republicans, as well as conservatives in the Senate, are unwilling to bend in any way. Given that two-thirds of Republicans in the House voted against the fiscal cliff compromise, even though it made the vast majority of the Bush tax cuts permanent, the point is credible.

President Obama has also gone on record saying that he will let the country go into default rather than negotiate over the debt ceiling. Taking both sides at their word, we’re running out of options here. At this point, the most probable course of events (hopefully) may be another brokered deal in the Senate, with Boehner more or less forced to bring it to a vote in the House despite the wishes of his caucus. That is, if he lets himself be forced. Failing that, we may be looking at a standoff and, eventually, possibly a real default. This could rock the financial markets and, in the best-case scenario, would certainly force interest rates on U.S. debt higher, costing us billions of dollars we don’t have.

As politicians on both sides continue to look and shout into the media abyss, they find themselves increasingly trapped by the echoes. Now is not the time for posturing or laying out red lines; now is the time for principled compromise. As things stand, in a couple of weeks we may look back at the uncertainty and angst leading into the end of last year as the good old days, before the U.S. voluntarily defaulted on its obligations.