I have renewed confidence about the ability of the Germans to solve any and all problems associated with the euro, after spending several hours yesterday building a play castle for my son.

The box itself did not make the project look that bad—large, but doable. Once opened, though, on Christmas Eve after he went to bed, things looked a lot more challenging—perhaps 1,000 pieces challenging. So rather than stay up, I decided we could do it together the next day. I am sure any parents reading this can already see the problems with that.

But we got through it, and this thing is amazing! It appears to be based on an actual medieval castle, with features such as a working elevator, a portcullis that holds in unwanted guests where rocks (among the hundreds of pieces provided) can be dropped on them, gates with locks that work, many warriors with associated weapons and armor, a king and a queen, and even a three-piece falcon with perch. Altogether an astonishing piece of work—and I say this even after spending hours putting it together. 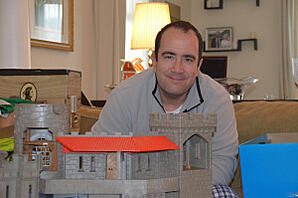 The castle was made by PLAYMOBIL®, a German company, and, if this level of detail, planning, and craftsmanship is anything like what the Germans are bringing to the table for the euro, I have even more confidence in my ongoing expectation that they will pull it through. We have heard much less about Europe over the past couple weeks, despite turmoil in both Italy and Spain. Although I expect more storms to come, clearly the institution building and planning that has taken place over the past couple years is bearing fruit.

The U.S., however, is not as fortunate. No real news on the fiscal cliff front from a Washington perspective, but there is evidence that consumers are starting to get scared. I have written before about the disconnect between consumers, who continued to spend, and business, which did not. That disconnect is going away, as consumers start to cut back. Preliminary figures suggest that holiday spending only increased 0.7 percent, well below expectations. If consumers pull back, as they seem to be doing, that will remove the biggest prop under the economy. Combined with the headwinds from increased taxes and lower spending, if we go over the fiscal cliff, this will almost certainly push us into a recession.

At this point, even if the cliff is avoided, we are probably looking at a short-term deal, which means that we will be dealing with the same level of uncertainty going forward as we are now. This likely means continued weakness in both business and consumer spending. Government stimulus will be declining as well, with the extended unemployment benefits and payroll tax waiver both expiring on January 1. Overall, although we still have the potential for the modest but sustainable growth I talked about in the overview, it looks increasingly probable that government ineptitude will erode that, even if we do get a short-term deal.

It is important to remember, however, that, even if this recovery stalls, the healing process will continue. The U.S. consumer and business sectors are significantly healthier than they were a year ago, and governmental downsizing, though painful, is necessary in the medium term. Accelerating that will hurt, but it will at least get us to overall health faster.

There is always the hope of a grand bargain that will reduce uncertainty, but at this point that doesn’t seem to be the likeliest option. If we get a short-term deal, which seems likely, we may have to continue with the slow healing process that we have been experiencing.

There are worse things.