In a previous guest post, Peter Essele pointed out that, on an income basis, housing appears very affordable and that the aggregate price index has tracked quite closely with the sold/for sale ratio. The correlation between the two is quite high, at 0.93, suggesting that they are causally linked, which is certainly reasonable from a fundamental supply/demand standpoint. Peter went on to conclude that these metrics support the continued strong performance of the housing market, although, as more supply has come on the market, the ratio has become less favorable.

After looking at his analysis, I decided to take a look at the demand side of the equation. Just as the supply ratio has a high correlation with prices, so, too, should demand. As a proxy for housing demand, I looked at household formation, since, by definition, a household needs a house. Let’s look at this relationship. 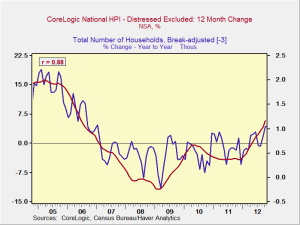 The above chart shows the change in housing prices plotted against the change in households, both on a percentage basis. I tried different lag periods and found that three months worked best—that is, three months after household formation occurred, housing prices ticked up. The correlation between this formation and prices is slightly lower than that between the supply ratio and prices, but it’s still high enough to conclude that the demand from household formation will in fact help determine price changes.

The good news here is that household formation is trending upward, which has supported, and reasonably will continue to support, strength in the housing market. Not only that, but there is good reason to expect household formation to continue at higher than normal rates due to pent-up demand. During the Great Recession, many people simply could not afford to set up their own households—some were even forced to move in with others—resulting in a significant decline in household formation, even as the population increased.

I will spare you the detailed development of the pent-up demand, which can be found in a good Cleveland Federal Reserve Bank paper. Suffice it to say that there is a substantial number—in the millions—of households that would have been created in a more benign economy, and it is reasonable to conclude that, as conditions improve, they will be created and require housing.

Both the supply and the demand sides therefore have strong fundamentals, suggesting that the housing recovery is likely to persist and may even strengthen. Although there are certainly offsetting factors, the weight of the evidence is for continued growth.