In the last post we examined the decline in consumer demand and what it meant for employment, which left us asking: What about the future?

As we consider this question, I want to review some charts. The first one (Figure 1) shows personal income minus government transfers. If you look closely, you will see that the recession of 1973–1974 was the last time, until 2009, that personal income actually declined in any meaningful way. 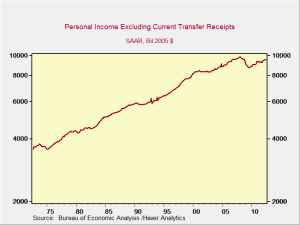 The next chart (Figure 2) illustrates the same point, but in a different way. In it we can see that, from about 1975 on, employment grew at a faster rate than the population. In other words, the employment participation rate increased until, again, 2009. 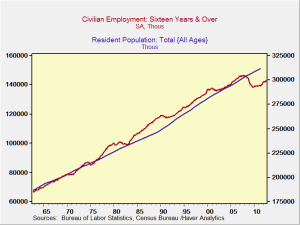 Why was this? How could employment grow at that rate? How could personal income continue to increase over that long a period with no decline? The answer is that the Federal Reserve and the federal government stepped in during any decline to stem the damage and kick-start growth again.

The means to do this was additional federal spending, driven by debt, and easier access to debt for consumers. By borrowing against the future, the government and consumers could preserve a growing standard of living—for a while.

Another way to look at this is to look at federal deficits over time, per another chart (Figure 3). 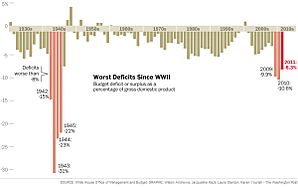 Those who created the chart were looking to focus on how the current deficits were the worst since WWII, but, as I look at it, I see something different. In fact, you could say exactly the same thing (i.e., about the worst deficits since WWII) in the mid-1970s, in the early 1980s, in the early 1990s, and in the early 2000s. In every case, after a recession, the government stepped in with deficit spending to moderate the damage. In most cases, the deficit dropped as the economy recovered, but not always. In the current crisis, the deficits are larger, but, given the size of the problem, not obviously inappropriate. So, in fact, our situation today is something that has been standard procedure for the past 40 years.

So why is it different this time? There are many reasons, but the three big ones are:

We have hit the end of the line on our ability to smooth out the business cycle, and, because it has been smoothed out for so long, the adjustment has been all the more painful. A good analogy is forest fires. In nature, small fires occur frequently and burn out flammable material. Damage is done, but the fires are small enough that the ecosystem as a whole is not threatened.

In contrast, if small fires are suppressed, flammable material such as leaves and underbrush can build up over years. When a big fire comes along, it can be of a size to threaten the entire ecosystem. That is what has happened here in the economic sense.

Moving back to employment, one way to look at the terrible decline in U.S. jobs over the past couple of years is to consider that we had, all at once, the unemployment that should have been spread over a couple of decades. Of course, there was a huge drop, if that is true.

The positive side of this analysis is that, once the underbrush has been cleared, the stage is set for new growth. I suspect that is exactly what is happening here. If you look at the previous charts in a slightly different way, focusing on more recent results, you see that growth in both income and employment has resumed at about the same rate, measured by the slope of the line, as previously. We will not be bouncing back to previous levels—that will take time and will have to occur naturally—but the slide appears to have stopped. The natural growth of the economy appears to have resumed, after having been reset at a lower level than the unsustainable level of the past.