You’re likely aware that the fiscal cliff refers to the package of tax increases and spending cuts scheduled to take effect, absent Congressional action, at year-end. The chart illustrates the various components included in the fiscal cliff; each one would be significant on its own, but taken together, they could prove disastrous for the economy. 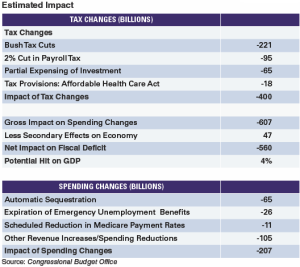 The largest component of the fiscal cliff—about two-thirds of it—is made up of tax increases that will come from the expiration of the Bush-era tax cuts and the payroll tax cut, as well as from Obamacare. Spending cuts account for about one-third of the cliff. The total impact of these increases and cuts is estimated to be a bit less than $600 billion, or about 4 percent of the U.S. economy.

Think about what that means. If you knock 4 percent off the economy, the economy becomes 4-percent smaller. Now, if we are growing at 2 percent, and we subtract 4 percent, we end up with a decline of 2 percent—an economy in recession. That would be bad, but not particularly severe.

There are, in fact, good reasons to expect the result to be worse. Economic research and actual experience in Europe tell us that the effect of the tax increases and spending cuts is not actually one-to-one. The multiplier seems to be between 2 and 3 for taxes and between 1 and 2 for spending.

This is really big. This is close to the last recession we had and is bigger than anything else we’ve seen in the U.S. since the early 1980s. Unemployment would rise substantially again, likely more than halfway back to the peak of the past couple of years, according to the Congressional Budget Office. And that’s just one side effect.

Now, remember, the multiples are uncertain, so these calculations are at best educated guesses. Also, there are offsetting positive consequences. Going off the fiscal cliff would largely solve the deficit problem and would therefore substantially reduce uncertainty, which could help jump-start growth. This certainly is not a prediction of doom, just a reasonable estimate.

And, precisely because it could be so bad, it probably will not play out like this. No citizen—and especially no politician—wants to see this much unnecessary economic pain. We do have to solve the problem, but we do not have to front-load the pain.

As such, I expect some sort of resolution, short of going off the cliff, before year-end. Both sides now have to live with each other, like it or not, and they have no incentive to put off the process.