Two pieces of economic data came out in the past couple of days that I think are worth a look. I want to start with inflation; my other post deals with the recent retail sales numbers. 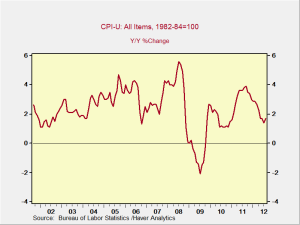 You can see that CPI has been quite volatile, typically running above 2 percent, except for the crisis years of 2008–2010 and more recently. Why isn’t more being said about inflation today, as it was almost 4 percent in 2011 and looks like it may be heading above 2 percent again?

To get at the answer, the next inflation graph worth looking at is for all prices excluding food and energy. Economists don’t eat or drive (or heat their houses), as the quip goes, so this is their preferred metric. I can assure you, however, that my four-year old eats a lot, so this can’t be the reason why they prefer to exclude these prices. Instead, they do so because food and energy are subject to highly volatile factors that are beyond the Federal Reserve’s control. By stripping out these two components, what remains is more reflective of the parts of the economy that the Fed can influence. Overlaying the CPI less food and energy on the above chart looks like this. 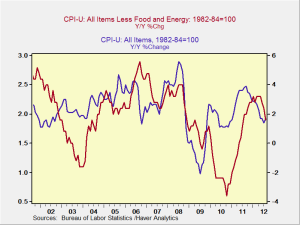 You can see that more often than not, the red line (which in this graph excludes food and energy) is lower than the blue line (which represents all goods). This is because food and energy prices, over the past decade, generally have been growing faster than other prices.

If we look at the trends on a monthly basis, this becomes even clearer on the following chart. 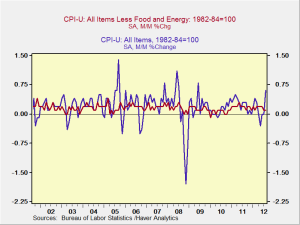 It’s also worthwhile to look at just how volatile energy prices are. In the following chart, the red line represents energy prices. Note how violently it bounces around the overall price-change line. 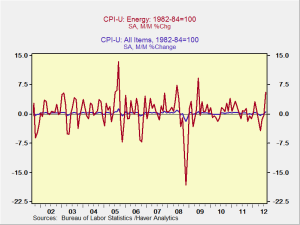 Note especially that in the most recent month on this chart, energy prices bumped up 5.6 percent, but overall prices did not increase nearly as much.

September’s CPI, which was released today, was up by 0.6 percent; that’s very high, more than 7 percent on an annualized basis, which would rightly warrant Fed action. Again, once you strip out energy—particularly gas, which increased 7 percent—and food, the underlying increase was only 0.1 percent—right on the Fed’s target range.

Overall, it makes sense to strip out highly volatile items to get at the underlying trend, and this is why the CPI ex food and energy is the preferred policy metric. Real-world costs can’t be ignored, however, and this is why the Fed also goes beyond the core inflation indicator in its analysis.

Please let me know if the charts included here are helpful. I have used some in the past, but this is the first time I have used several as central to the discussion. Do you like it? Thanks for your feedback.