Up the wall of worry

We had another strong month to end the quarter, with markets generally finishing in the black, though well off their mid-September highs. The dominant factor in all markets was central bank action, with the prize for the most effective action going to the European Central Bank (ECB) for its announcement that it would support the sovereign bond markets for nations in trouble. The Federal Reserve (the Fed) got the silver medal this quarter for its announcement of unlimited quantitative easing, and the Bank of Japan and the Chinese central bank also joined the party.

Not surprisingly, markets responded. The S&P 500 Index rose 2.58 percent for a very strong September, and the Nasdaq posted a solid return for the month of 1.61 percent. Both indices posted strong quarterly results, with the S&P 500 up 6.35 percent and the Nasdaq up 6.17 percent.

Technicals remained very strong, with both indices well above their 50- and 200-day moving averages. The Nasdaq remained within its previous trading channel, while the S&P 500 broke out to the high side, though it later moved back in, suggesting that the move may have been premature.

U.S. fundamentals were weaker than the technicals. Earnings guidance continues to be generally negative and blamed on the weak global economy. The divergence between the strong technical results and the weaker trends in fundamentals is something we continue to watch closely.

International markets showed very similar trends to those of the U.S., but to an even greater degree. The MSCI EAFE Index was up a very strong 2.96 percent for September and 6.92 percent for the quarter, while the MSCI Emerging Markets Index was up an even more impressive 5.84 percent for the month and 6.97 percent for the quarter. Again, however, end-of-month results were down from higher mid-month levels for largely the same reasons as the U.S. markets. Positive factors were the ECB announcement, the decision by the German constitutional court that the rescue plans in the European Stability Mechanism were indeed constitutional, and the perception that Greece and Spain had started to get their houses in order. Negative factors were the realization toward month-end that the problems in those countries remained unresolved.

Despite the Fed’s QE3 announcement, the 10-year Treasury yield ended the third quarter at 1.63 percent, within a basis point of where it had begun. Over the course of the quarter, however, rates proved quite volatile, falling below 1.4 percent and rising above 1.9 percent. Meanwhile, riskier bonds experienced spread tightening on a widespread risk asset rally. Junk bond yields rallied from 7.3 percent to 6.6 percent, according to the Bank of America Merrill Lynch High Yield Master II Index, and the spread over Treasuries tightened from 5.7 percent to 5 percent. On a historical basis, yields are at extreme lows. On the other hand, spreads remain higher than in the 2005–2007 time frame, although they still imply a relatively optimistic outlook for financially stressed companies.

The strong performance of risk assets in the first half of September depended largely on government action, and the weakness in the second half suggested that the effect of those actions may not last. Experience with past announcements by the Fed in the U.S. and the ECB in Europe also suggest that the effects may be temporary. Overall, although the month and quarter as a whole had excellent results, the pending lack of further government support and weakening economic and business fundamentals suggest caution.

Reasons for uncertainty remain in each of the major economic areas. In the U.S., the upcoming presidential election has exacerbated concerns over impending tax increases and spending cuts known as the fiscal cliff. Either of these on its own might create volatility, but the combination of the two has had the effect of discouraging businesses and consumers from investing and spending. At the start of the quarter, employment and economic activity was growing at a reasonably healthy pace in the U.S. During the quarter, however, as uncertainty mounted, most measures of economic activity declined.

Europe faced its own set of elections and fiscal challenges. Debt problems in Greece and Spain continued to worsen during the quarter, as their economies weakened. Despite the periodic support of policy announcements, there were riots in both countries by quarter-end. Italy and France continued to wrestle with their fiscal issues, with no resolution in sight. Even Germany faced a weakening economy and a consequent dip in political support for the whole European project. At the end of the quarter, despite very real progress made, the future of the euro was in doubt by many.

Finally, although China does not have elections, it does have a pending change of government. Domestic political woes during the quarter included the downfall of Bo Xilai, a senior politician who had been tipped as a candidate for the highest level of power. Moreover, the incoming top man, Xi Jinping, disappeared from public sight for two weeks with no explanation. This uncertainty at the top of the government has exacerbated the nation’s economic uncertainty. China’s economy continued to slow during the quarter, and growth approached levels that historically were thought to risk social unrest. Perhaps, as a consequence, the government has encouraged nationalism, which has led to an emerging conflict with Japan and other nations over the ownership of islands in the surrounding seas.

In light of all this, it is no surprise that the U.S. real economy continued to exhibit weakness. Employment gains slowed substantially over the quarter, and business activity indices fell. Manufacturing indices flirted with an outright decline, and, although service industry indices showed stronger performance, they were lower than earlier in the year.

Not all of the news, however, was bad. Housing remained a bright spot. According to the Case-Shiller 20-City Home Price Index, the beginning of the third quarter marked the first time that home prices had risen on a yearly basis since the artificial boost caused by the 2010 government new homebuyer program (see chart). Prior to that, prices had been falling since the end of 2006. Consumers appear to be slowly taking advantage of attractive 30-year mortgage rates, which fell to a historic low of 3.45 percent by quarter-end, according to the Fed.

With its announcement of QE3, the Fed made clear its intention to keep mortgage rates at low levels, with the goal of extending the current housing market rebound. In 2012, housing affordability, defined by the ability to afford a median mortgage on a median income, hit its most attractive level since data collection began in 1986. Housing is a foundational component of any economic recovery, and the fact that it continues to recover suggests that a stronger overall recovery may follow once some of the political uncertainty has been resolved. 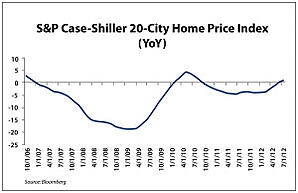 Light at the end of the tunnel

Despite the current levels of uncertainty in economics and politics, in many ways, we are in a better place now than we have been in for several years. In the U.S., overall debt levels have been reduced, and employment has recovered. Consumer spending remains relatively strong, and the economy continues to grow. In Europe, much of the uncertainty revolves around problems that are now known, rather than estimates of unknown problems. We have made substantial progress over the past several years, and the problem now is slow growth, rather than decline.

It is also worth bearing in mind that, if uncertainty is a major driver of the current slow growth, then the election may resolve much of that uncertainty, clearing the way for faster growth. Even if the election does not fully clarify the situation, it will lay the groundwork for future resolution. In short, although risks remain, we are considerably closer to the end of the tunnel than we were.

As such, it is important to stick to long-term planning to help ensure that you are in a position to benefit from long-term growth. Short-term uncertainty and volatility notwithstanding, the U.S. appears to be among the best-positioned nations in the world for long-term growth.

Disclosure: Certain sections of this commentary contain forward-looking statements that are based on our reasonable expectations, estimates, projections, and assumptions. Forward-looking statements are not guarantees of future performance and involve certain risks and uncertainties, which are difficult to predict. Past performance is not indicative of future results. Diversification does not assure a profit or protect against loss in declining markets. All indices are unmanaged and investors cannot invest directly into an index. The S&P 500 Index is a broad-based measurement of changes in stock market conditions based on the average performance of 500 widely held common stocks. The Nasdaq Composite Index measures the performance of all issues listed in the Nasdaq Stock Market, except for rights, warrants, units, and convertible debentures. The MSCI EAFE Index is a float-adjusted market capitalization index designed to measure developed market equity performance, excluding the U.S. and Canada. The MSCI Emerging Markets Index is a market capitalization-weighted index composed of companies representative of the market structure of 26 emerging market countries in Europe, Latin America, and the Pacific Basin. It excludes closed markets and those shares in otherwise free markets that are not purchasable by foreigners. The Bank of America Merrill Lynch High Yield Master II Index tracks the performance of U.S. dollar-denominated below-investment-grade-rated corporate debt publicly issued in the U.S. domestic market.

Tune into Yahoo Finance's The Final Round on Thursday, March 12, between 2:50 and 4:00 P.M. ET to hear Brad talk about the market. Exact interview time will be updated once confirmed. Watch at finance.yahoo.com.

How Should Investors React to the Coronavirus?
Advisor Perspectives, 02/26/20