There is quite a bit of discussion in the press about the U.S. economy, much of which is misguided or misleading. One of the worst offenders is the discussion of unemployment, and I wanted to dig into some of the underlying data to discuss what I look at instead.

The first issue is which employment rate we should pay attention to, as there are several. The one commonly reported is called the U-3 series, which is the total unemployed as a percentage of the civilian labor force. This was most recently reported in May as 8.2 percent.

For this series, in order to be considered unemployed, you have to be actively looking for work. If you give up looking, even if you still haven’t found a job, you are no longer counted as unemployed. This results in lower unemployment rates in extended weak periods, like now, as people who drop off the list aren’t factored in.

Because of this, there are other unemployment rates that are more inclusive. U-6 is the most comprehensive, representing the total unemployed (U-3), plus all marginally attached workers and those working part-time for economic reasons. In other words, anyone who wants a full-time job but can’t get one.

As an example, suppose a factory laid off half its workers. In the U-3 series, those laid-off workers would count as unemployed. Fair enough. If, on the other hand, the factory kept everyone but cut their hours—and wages—in half, the U-3 series would see them all as employed and pay no attention to the fact that the workers want full-time employment and income. The U-6 would include them as part-time workers for economic reasons.

The U-6 is the more economically indicative of the series, and it is the one used by most economists. Why is the U-3 the official rate? Not sure, but perhaps it isn’t a coincidence that it is lower than the U-6.

Over time, changes in the series tend to be consistent, meaning both tend to measure the same economic forces. See the graph below. The current U-6, at 14.8 percent, is well above the U-3, at 8.2 percent, showing that the real situation is much worse than the one reported in the press. Although the level is higher, however, the U-6 has also improved much more than the U-3, indicating that progress does continue.

I will be discussing unemployment much more in subsequent posts, but I wanted to lay the foundation for that discussion. One of the most interesting ways to break down the data for discussion purposes is by age and educational status, and we will be looking at that shortly. 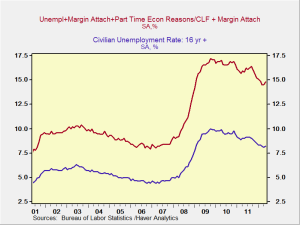