After the decline in the stock market yesterday, the question on many people’s minds is whether this is the correction we’ve been waiting for. It could be. But even if it’s not, we may well be in for a turbulent month.

Let's look at what could be behind the market drop and where the market might be going from here.

A sharp decline in earnings growth

I'll start with the fundamentals. Per FactSet, expectations for third-quarter earnings growth have dropped from 8.9 percent on June 30 to 4.7 percent, a decline of almost half. Lower earnings growth should result in lower stock prices; instead, prices climbed over the first two months of the quarter.

Arguably, the current decline in the market is merely a response to the decline in earnings growth.

Moving on to risks, the past couple of months have seen the Scottish referendum, sanctions on Russia starting to bite the European economies, and a lawsuit within Germany that might declare many of the European Central Bank’s actions illegal. Europe is looking much shakier on many fronts. China, in the meantime, could be starting to see housing price declines—a new and very scary development.

These factors have shown up in international stock market results over the past month, which have been much worse than U.S. returns.

The current decline, then, might be nothing more than a rational adjustment to changing expectations. If so, it could be relatively minor, and over soon. This makes sense, because the drop, as I write this, is about 4.5 percent—minor by historical standards. We’ve seen very few declines recently, so this feels worse than it really is.

But if the decline is normal now, we have to think about when it might become abnormal, signaling something worse than a normal correction.

A look at the moving averages

A metric that I use, and one that has worked well in the past, is to compare current prices with moving averages, which are simply the average of the closing price for the past X number of days. The idea is, when prices move above or below an average, we’re seeing a change in trend. We’ve been in an uptrend for some time, so any move below would be significant. 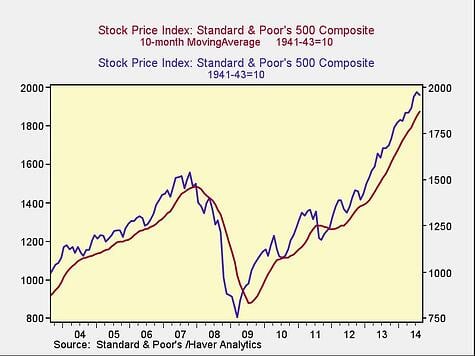 The trade-off between shorter periods and longer ones is between false alarms and less damage to your portfolio. The 50-day moving average will get you out faster, but you’ll probably end up moving right back in.

Yesterday, we broke through the 100-day moving average. In and of itself, this is not a big deal—it’s already happened three times so far this year—but the speed and amount by which we dropped through it was noteworthy.

When will I start to worry?

Where I really start to pay attention is when we break the 200-day moving average. Based on history, this is the point at which a significant further decline becomes increasingly possible. We aren’t there yet, but we’re moving closer.

Right now, the 200-day moving average is just about 1,900 on the S&P 500. If we drop below that point, my level of concern will increase substantially. Even if we do break below that level, it’s not an inevitable indication of problems (as you can see in the above chart for 2011), but it does raise the odds.

Hopefully, we won’t get to that point.