What Will the Market Return This Year?

I hope you enjoy today’s insightful post from my colleague Peter Essele. See you next week! — Brad

“What will the market return this year?” As a portfolio manager, I hear some variation of this question at the beginning of each and every calendar year. Following the requisite exchange of pleasantries, it inevitably comes up at cocktail parties, birthday get-togethers, client meetings, and even the après-ski scene.

The truth is, nobody really knows

Many people like to throw out a number, and the phrase we often hear is “high single digits,” which equates to something between 7 percent and 9 percent. It’s not a bad guess, in fact, because the S&P 500 has returned roughly 7 percent, on average, since its inception.

These estimates are generally an extrapolation of the market’s most recent returns. In years following strong markets, the forecasts tend to be higher, and they’re often lower after years with meager returns, like 2008 and 2011. Our behavioral biases suggest that recent trends should continue, so the natural result is a forecast based on recent history.

As mentioned, the average return of the S&P 500 since 1928 has been around 7 percent, with a standard deviation of 19. Therefore, based on a normal distribution, the index has achieved a return profile of 7 +/− 19 percent, roughly 68 percent of the time. Simply stated, you could reasonably expect a return between −12 percent and 26 percent in two out of every three years if the market exhibits similar characteristics to what we’ve seen in the past.

Of course, commentators can’t use this type of estimate because it’s not easily consumed, and the range is far too wide to impress anyone. Instead, what you’ll often hear is a punt, such as "the high single digits," especially after a period of strong market performance.

So, what about this year?

Once again, the prevailing forecast is an equity market return in the high single digits. But how often has the S&P 500 provided this type of return to investors?

Let’s look back at history. The chart below shows the range of S&P 500 calendar returns since 1928, with the lowest return coming in at −47.07 percent and the highest at 46.6 percent. The red square represents calendar-year returns of between 6 percent and 10 percent. 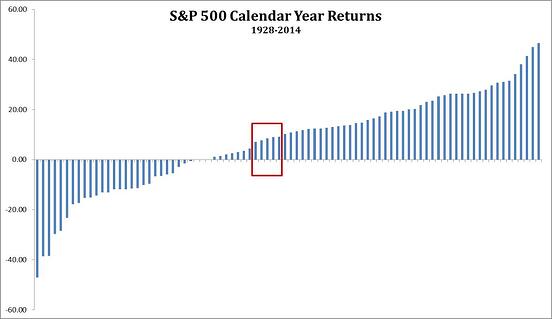 Since 1928, the price return of the S&P 500 has come in at high single digits in only five calendar years, or roughly 6 percent of the time. In addition, a 7- to 8-percent rate of return has only occurred twice over this period, or less than 3 percent of the time. Considering an average return of 7 percent, standard deviation of 19, and very few occurrences in the aforementioned range, it’s likely that the S&P 500 won’t achieve a high-single-digit return in 2015, as many have predicted.

Here’s a more reasonable estimate: an average return of 7 percent over the next decade.

The next time a cocktail-party conversation turns to predicting the market's performance, try responding with “7 percent over the next decade, on average." After all, you’ll have a two-thirds chance of getting it right.