How Long Can Markets Ignore the Real World? 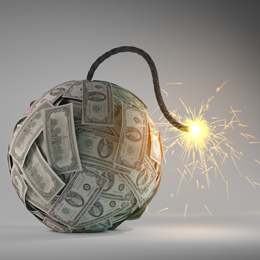 Yesterday, we saw a passenger airliner shot down over what is arguably Europe. We saw an invasion launched as missiles rained down on civilian towns. And, in far less devastating news, we saw equity markets decline.

The Ukraine conflict has been simmering for months; the Middle East has been in conflict for decades. Still, yesterday's news came as a surprise, knocking markets down.

What’s interesting is how many people, and the U.S. media, have normalized these conflicts, putting the possibility of very unsettling surprises more or less out of their minds. Who now remembers the Russian annexation of Crimea? Or the Syrian war, still underway?

Through all of this, and through the snowdown, the stock market indices have been hitting new highs. Interest rates have remained very low—perhaps too low. Investor complacency has also reached new highs. Everyone assumes that things will continue to go well.

Are we in for another Lehman moment?

Trouble is, we'll have no notice when something boils up that, in retrospect, should not have been a surprise. You hear the phrase “Lehman moment” quite a bit these days in the investing world. No one knew the day before Lehman failed that it would become a byword for meltdown, the moment when things really hit the fan.

Taken in context, the market declines yesterday are modest. Nothing to worry about, normal volatility. Everything is still good, as far as investors can tell, and that will continue to be the case—until it isn’t.

The longer things stay good, the more people want and are allowed to take risks, the more money is borrowed, and the more everyone thinks that it will be different this time. Things have actually been incredibly stable in the markets over the past couple of years, despite the usual chaos in the real economy and geopolitical world. This mismatch has led to record markets and outside returns.

Anyone betting this will continue indefinitely is assuming that there are no more surprises out there, similar to or worse than what happened yesterday. That may be so. But the safer bet is that, at some point, we will see a convergence between the financial markets and the real world. Tails only wag themselves for so long.

What should investors be doing?

Bonds, scorned in the face of equity returns, did well yesterday. So did gold. For investors who have moved more heavily into stocks, or whose stock allocations have grown substantially, maybe it’s time to consider reallocation.

You never know when those bombs might drop into your portfolio.