IBM’s Woes Highlight a Major Risk to the Market

And he woke up, and it was all a dream.

With a six-year-old son, I admit I’ve been forced to end stories in that way on more than one occasion, when I get stuck and run out of ideas (or energy). Looking at the market today, though, the events of last week have certainly taken on a dreamlike quality. What just happened?

After watching the S&P 500 bottom and bounce on the 15th, we’ve seen a steady recovery, with the market now more than 1 percent above its 200-day moving average and seemingly headed higher.

Was the past week just a dream?

I don’t think so. I think it was a warning shot that we need to heed, even if the market does continue higher. The risks that drove the market down remain—and, in many respects, continue to intensify. Let’s look at some examples from today’s headlines:

To summarize, IBM sales were down 4 percent for the last quarter, and earnings were down even more. Shares dropped 7 percent. Over a longer period, IBM has had multiple quarters of flat or declining sales, and revenues are about the same as they were in 2008, even as the share price continued to climb through 2013. 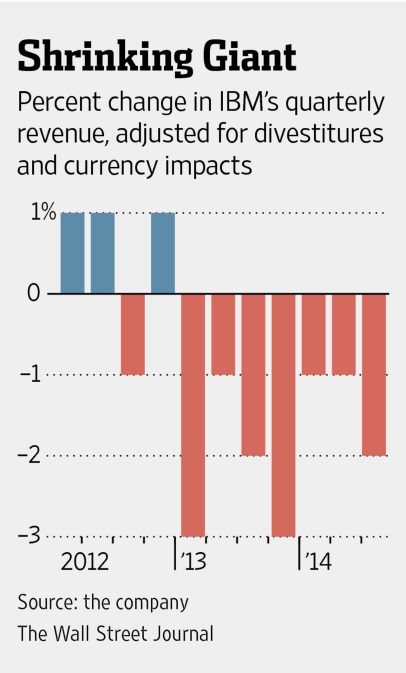 How did the company manage to grow earnings, and its share price, even as revenues were stable at best? Mostly by buying back shares. Buybacks are generally a good thing; by reducing the number of shares outstanding, the earnings for each of the remaining shares go up. But, as with IBM, such buybacks can create the illusion of a growing business when that’s not really the case.

Since 2000, IBM has spent $108 billion on its own shares, financed with debt. Over the same time period, the company also spent $59 billion on capital expenditures and $32 billion on acquisitions, for a total of $91 billion invested in the business. Over 14 years, management decided that, on balance, it was better to buy back company shares than to invest in growing the business—not a good sign for the future.

Mind the gap between sales and earnings growth

IBM isn’t the only company where this is true; many have the same issues. As the narrative shifts, we may have hit the end of the runway for financial engineering strategies to lift share prices. Actually having to grow business in order to boost share prices is a much bigger challenge for companies than writing a check for stock buybacks. It also makes it much harder to meet market expectations for earnings increases.

The gap between sales growth and earnings growth expectations now presents the biggest risk to the market, in my opinion. Financial engineering has been used, very successfully, to generate earnings gains that were multiples of revenue growth. If that gap starts to close, we could enter a much more difficult market environment.