How Does the Market React to Rate Changes? Maybe Not the Way You’d Expect

Looking into the relationship between interest rates and stock market valuations, I’ve found two very interesting points that have a direct bearing on our investments.

First, the valuation metric you use matters. As you may remember, I prefer a cyclically adjusted price/earnings ratio, or Shiller P/E, over a P/E based on only 12 months of data. When you compare the relationships with interest rates, among other factors, it’s very clear that the Shiller P/E has the better economic foundation; not only is it more intuitively sensible, it’s also a better analytical tool.

Second, over the past 60 years, there have been three distinct regimes when it comes to interest rates and market valuations, as shown in the chart below: 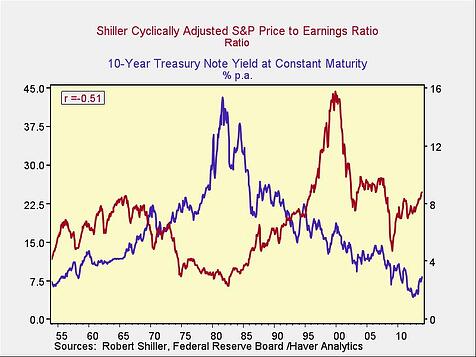 The question now is, Has a new cycle started, where rates and valuations go up together again, much as in the first period? If you look at the correlations between the two series, they very definitely invert and then change again over these time periods, so it’s not merely a visual trick. But why does this happen, and what can it tell us about our current situation?

I think it has to do with where interest rates are with respect to the normal interest rate that we see in a healthy economy. I’ve written about this before, concluding that it should be in the 4-percent to 6-percent range, depending on inflation. Looking at the chart, when rates cross this point, the relationship between valuations and rates changes. Rate increases up to the normal level are good for the market, while increases above the normal level are bad, and the same applies in reverse for rate declines.

What matters is whether rates are moving toward normal (good) or away from normal (bad).

This is also consistent with the chart I used yesterday, showing delays between the start of rate rises and the market reaction. As rates increase, it takes time for them to reach and move beyond the normal rate, triggering a negative market reaction.

Should we really be hoping for a rate increase?

The market’s reaction to changes in rates isn’t what many people might expect. The common expectation is that rate increases are bad for the market. After all, rising rates make the present value of future earnings decline—and, in theory, that’s how the market is priced. On the other hand, rising rates likely also mean faster growth, which should make the market worth more.

Given current low rates, a rate increase would bring us closer to normal, which, using this model, should make the market worth more. Conversely, falling rates (like we’re seeing now) should push market valuations down, since they signal a further move away from a normal economy, and more weakness. 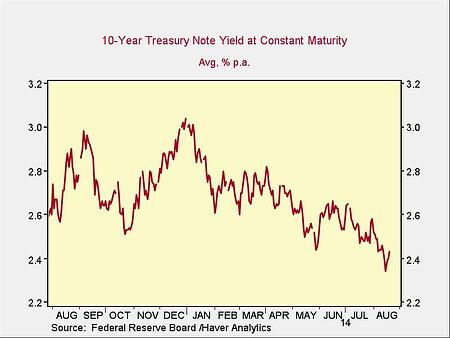 The drop in 10-year rates over the past year is therefore a cautionary sign, supported by the fact that the decline started in the surprisingly weak first quarter—what we would expect if this thesis holds.

Given the big-picture concerns I’ve discussed over the past couple of days, many analysts see continued low interest rates as a supportive factor for the market. This analysis suggests that might be exactly wrong.

Perhaps we should really be hoping for rates to rise, at least a bit, as a sign that the crisis is indeed over. That would be good news—and support the market.