Although I touched on a few specific examples the other day, finding a way to express the failure of economics in the face of politics is difficult. There aren’t many smoking guns out there.

Or so I thought. Fred DeBaets, one of our fixed income experts here at Commonwealth, sent around the following chart yesterday morning. It shows that nine countries—all in Europe—have negative interest rates for two-year government debt. 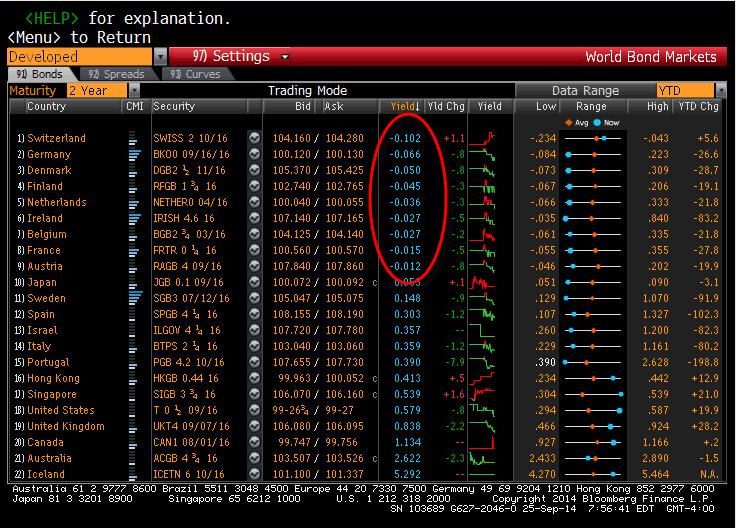 In many ways, money is a product like any other, and the price is normally set at the intersection of supply and demand. Seeing nine countries with negative interest rates is like leasing a car and having the dealer send you a check every month, instead of the reverse. It just doesn’t make any sense.

How could this happen?

To continue with our analogy, suppose the government wanted people to buy new cars. It could subsidize the lease payments to the point that dealers could actually afford to pay people to drive cars away. That would have to be a heck of a subsidy, wouldn’t it? And any government that took that approach would have to be pretty desperate, right? Well, the same applies to interest rates.

The U.S. undertook such a strategy, though not nearly as extreme, with cars, and it worked in the short term. Clearly, the European Central Bank is expecting to do something similar with money.

Here’s the problem: The expectation that it will work is now firmly embedded in the markets. If it doesn’t happen, you can expect very unpleasant consequences. The rise of anti-euro parties in many countries, especially Germany, means failure is more likely than is commonly assumed. (See the Telegraph’s very good article on Standard & Poor’s recent credit alert on the eurozone.)

Outlier events happen, and we can see a very big one on the radar screen for Europe as the gap between politics and economics widens.

In a conversation just yesterday, I mentioned that, while Russia is cheap, we probably shouldn’t assume assets there are as safe as in the U.S. This morning, I saw a Wall Street Journal report that a Russian legislator has proposed confiscating foreign assets. Just yesterday, I sat in a conference call with Pimco about a recent SEC investigation; today, the CEO of Pimco resigned to join a rival company. Things happen.

I’m a big fan of valuation as a guide to future returns, but that expectation depends on the stability of politics, particularly legal protections for ownership and capital. In a changing world, any valuation of “cheap” must factor in outlier risks. I believe these risks are much higher than is currently priced in for most international markets, including those that look, right now, to be most stable.