Brexit: Deal or No Deal?

While many of us have been focused on the escalation of the trade war between the U.S. and China, our neighbors across the pond have been grappling with issues of their own—the key among them being Brexit. The official deadline of March 2019 for the divorce with the EU is fast approaching. At the same time, the chances of Britain stumbling out of 40 years’ worth of integration and collaboration without a deal are rising. This outcome would have direct repercussions for the U.K. and European economies and, hence, for investors with assets in these markets. Brexit ripples will also be felt across the globe.

Let's take this opportunity to discuss the pain points in the Brexit negotiations, what a “no-deal” Brexit could mean, and what a potential deal might look like.

The idea behind the creation of the European Economic Community was to promote trade, defend human rights, protect the environment, and repel threats. The thoughts were noble, but the path to economic cohesion without a political or monetary union has not been an easy one.

Despite close ties between Europe and Britain, Britain made it abundantly clear that it wasn’t entirely sold on the supremacy of economic cooperation over policy independence. In fact, the U.K. waited 16 years to join the European Economic Community after it was formed in 1957. Further, euroscepticism kept it from joining the EU and adopting the single currency when it was introduced in 1999. Thus, Britain has always had one eye on the exit door, and Britons expressed their desire to exercise the exit clause in a narrow 52–48 vote for a split in the June 2016 referendum. Campaigners spun the Brexit argument on the grounds that EU membership was expensive, out of touch, and a source of uncontrolled immigration. Thus began the rancorous and messy divorce proceedings.

No end in sight

It has been more than two years since the Brexit referendum, and the region, country, and ruling party of the U.K. appear more divided than ever. While both sides want to avoid a no-deal Brexit, the probability of this outcome is increasing, and all concerned are stepping up preparations just in case.

So, what happens if the two sides of the table can’t reach an agreement? The EU is home to nearly 45 percent of Britain’s exports; hence, a no-deal Brexit will jeopardize access to its largest market. Absent a trade deal, British exporters will be subject to WTO tariffs after enjoying years of duty-free trade. Further, Britain is the largest contributor to the bloc’s budget, behind Germany. Its departure would leave a gaping hole to be filled by other members contributing more or agreeing to spending cuts—both of which would be extremely tough sells.

For global equity investors, Europe and the U.K. combined account for nearly two-thirds of the equity allocation in developed ex-U.S. benchmarks and nearly half the equity allocation in world ex-U.S. benchmarks. The outcome of Brexit negotiations will have a direct impact on the valuation of companies domiciled in that region or doing business there.

Even as the hard cores would rather get out without a deal than negotiate a bad one, the moderates are scrambling to patch something together. Possible options being considered are a Canada-plus model, a Swiss model, or some variation thereof.

Canada model. Less than a year ago, the EU entered into a new trade agreement with Canada called the Comprehensive Economic and Trade Agreement (CETA). Among its many provisions, the CETA ended 98 percent of tariffs on goods, and it will remove 99 percent of them after seven years. But tariffs are only part of the problem. There are other barriers to trade, such as customs checks and differing regulations that the CETA doesn’t fully address. Also, CETA doesn’t do much for services, which make up most of the U.K. economy.

Swiss model. Another alternative that has been floated is the Swiss model. Switzerland has access to the EU’s goods sector but not to its services sector. Switzerland is not part of the customs union and, therefore, is subject to customs checks for goods crossing the borders. But Switzerland is allowed free movement of labor. It is required to make substantial payments toward EU spending on cohesion programs aimed at reducing economic and social disparities within the EU. Still, the EU harbors misgiving about its relationship with Switzerland, alleging that Switzerland routinely lapses on aligning regulations with the EU.

In the midst of this unprecedented uncertainty, the biggest domino to fall has been related to the U.K.’s currency, the pound. Among other things, currency reflects investor confidence in the country. Not surprisingly, investors are not fans of uncertainty they cannot model. This is evident in the positioning of active currency traders. 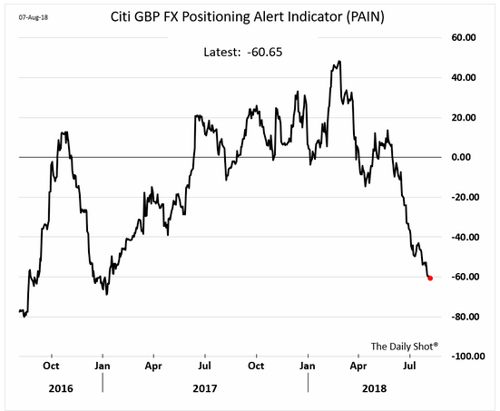 The pound is significantly weaker than the U.K.-U.S. rate differential would suggest. The currency market appears to be pricing in the risk of a "hard Brexit." The market is expecting the U.K.’s central bank rate to reach 1 percent in three years, only 25 basis points higher than the current rate that was recently hiked to 0.75 percent. Thus, there is not much confidence in the economy out there.

For U.S. equity investors, the large-cap FTSE 100 Index returned 2.34 percent in the year-to-date period. But currency translation into U.S. dollars resulted in U.S. investors losing nearly 6 percent due to the depreciation of the pound versus the dollar. Investors in the broader FTSE 250 Index experienced a similar outcome.

With the Brexit saga set to reach a key juncture in March 2019, there is no clear direction for the divorce agreement. There will likely be an interim treaty patched together to buy additional time for further negotiations. Nevertheless, this uncertainty will have negative implications for the pound, the U.K. housing market, and business and consumer confidence in the U.K. and across Europe. All of these factors have direct implications for the U.K.'s and Europe’s equity market valuations and volatility. As such, global asset allocators must reevaluate their risk-return trade-off of investing in the largest developed market outside the U.S.