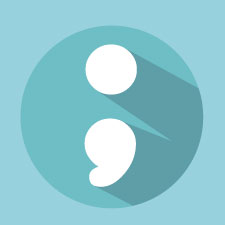 Editing is part science and part art form. There are certain grammatical rules you need to apply to your writing, but you also need your text to tell a story, and how you use your punctuation can add style and nuance. You might think this concept is more important when writing fiction, but I think it applies equally to business writing, which, let’s be honest, can be a little dry.

In response to some requests I’ve received, today I’m going to focus on three punctuation marks—semicolons, colons, and dashes—that, when used correctly, can add flavor to your writing and paint a clearer picture of the message you want your readers to receive.

The semicolon doesn’t get much respect these days. Though Abraham Lincoln believed it to be a “useful chap,” author John Irving believes that “[n]o one knows what they are anymore. . . . If you’re not in the habit of reading nineteenth-century novels, you think that the author has killed a fruit fly directly above a comma.”

He has a point—many people aren’t quite sure when and where to use the mark, so the easiest thing to do is to avoid it altogether. But I’m more apt to agree with President Lincoln: a semicolon can be useful, particularly when you have two closely related sentences and you don’t want to put a full stop (i.e., a period) between them.

I recently edited an article on Commonwealth’s giving back programs for the Commonwealth Business Review in which I purposely changed a period to a semicolon because the second sentence supported the first:

Originally, “he has big plans for . . .” was the beginning of a new sentence, but it is so closely related to the statement about raising “necessary dollars” that I felt it needed to remain part of this thought.

Semicolons are also used with conjunctive adverbs—words like “however,” “consequently,” and “therefore,” to name a few. When the adverb is used to connect two complete sentences, it should be preceded by a semicolon and followed by a comma.

Mr. Irving would probably argue against this usage as well, given how archaic he finds the semicolon, but in more formal business writing, I think it’s absolutely acceptable.

Colons, on the other hand, aren’t nearly as maligned as semicolons. Colons are a great way to direct attention to a list after an independent clause—that is, a full sentence with a subject and a verb. Be sure to follow the colon with one space, not two. Double-spacing after periods was a requirement in the typewriter age; with today’s modern word-processing programs, it’s no longer necessary.

What’s the wrong way to use a colon? Randomly, in the middle of a sentence, when the accompanying phrase is not an independent clause. For example, it’s not uncommon for people to do the following:

This is incorrect because “Important vitamins for expectant mothers are” is not a complete sentence. What would make this sentence right? Something like this:

I love dashes, and they can actually serve many purposes in writing. First of all, I want to clarify that a hyphen is a hyphen, not a dash, and it is used to connect closely related words that are modifying another word. For example, in the phrase “risk-adjusted portfolio,” “risk” and “adjusted” are the closely related words modifying “portfolio,” so they should be joined with a hyphen. Notice, though, that I did not hyphenate “closely related,” even though those two terms are modifying “words.” As a general rule, compound adjectives where the first word is an adverb ending in “-ly” should not be hyphenated. (Don’t ask me why; I did not make the rule—but I do enforce it!)

When we talk about dashes, we’re usually referring to en and em dashes.

The shorter en (–) dash (as opposed to the hyphen [-]), is used between numbers or words to indicate duration or range and is preferred as a minus sign for negative numbers.

The em (—) dash is a long dash often used to denote an abrupt change in thought, set off a series within a sentence, or attribute a quotation to its author.

From Theory to Practice

As I wrote this post, I made a conscious effort to use the various punctuation marks I talk about, not just in my examples but elsewhere in my text as well, so you can see them in practice. Of course, there’s a lot more to writing than how you use semicolons, colons, and dashes—you need ensure that you’ve organized your thoughts and customized your approach for the audience you’re trying to reach—but I hope these guidelines help you correctly incorporate more nuance into your articles, e-mails, and blog posts.

Are you interested in reading more lessons in punctuation? What do you think you struggle with the most? Share your thoughts with me below.