Don't Be a Victim: Mitigate the Risk of Fraud in Your Practice 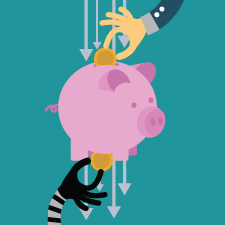 As an independent financial advisor, you must run a business, oversee your clients' finances, and adhere to both regulatory and firm requirements, to name just a few responsibilities. With everything else you have to do, finding strategies to mitigate the risk of fraud in your practice may not be top of mind. But given the variety of fraudulent schemes out there, it's a critical aspect of managing your practice.

Fraud involves using deception to make a personal gain for oneself, create a loss for another, or both. Significant frauds have been reported by the media and regulatory bodies, although these are generally limited to the misappropriation of funds. It might be surprising to learn that the number of frauds that go unreported or undetected is significant. Even in cases where fraud is identified, only half of the victim organizations recover their losses. In fact, the Association of Certified Fraud Examiners' 2014 Report to the Nations reveals businesses may be losing up to 5 percent of annual revenues as a result of occupational fraud.

Fraud can be committed by staff, vendors, or clients. Small businesses can be more at risk, as financial constraints may limit their ability to implement internal controls. And fraud is difficult to detect, partly because it comes in many forms:

So, what could this mean for your practice? Let's examine a real-life example of fraud before discussing best practices to mitigate the risk of fraud in your practice.

Bank robberies happen daily, but this one was different. The robber created an elaborate ruse, pretending to be part of the bank's audit team. He claimed he was there to conduct a review of its international currency procedures. But about an hour into the "audit," following a series of inconsistent and confusing questions, the fraud began unraveling. The staff started asking questions and voicing concerns. Eventually, the robber revealed his real purpose and claimed he had a gun. Nobody was hurt, but the bank robber got away (for a while, anyway).

A month later, a similar incident occurred at a different bank. This time, the robber wasn't so lucky! His second attempt was uncovered, and he fled. After his arrest days later, it turned out he was a former financial advisor with a history of financial problems and substantial debt.

Donald Cressey, a criminologist whose research focused on embezzlement, developed the fraud triangle to explain what causes an ordinary individual to commit fraud. Although this triangle addresses occupational fraud, it can be applied to fraudulent activities by anyone with whom you have a relationship of trust. The triangle's three sides are motivation, opportunity, and rationalization. According to Cressey's theory, fraud is unlikely without these three elements.

Adopting internal controls is an effective way to address the "motivation" and "opportunity" parts of the triangle. The "rationalization" component is personal to the individual and harder to combat, but a strong organizational culture and values can help. Some areas of focus include the following:

A review of your practice's current processes could identify those that pose a risk. For any process that concerns you, implement appropriate antifraud internal controls, including both preventive and detection controls. Here are examples you might consider:

Fraud can have a substantial ripple effect on a business—from destroying a firm's reputation to concerning clients and business partners. By instituting best practices, you may significantly reduce your risk of fraud. Even in the worst-case scenario, taking these measures may help detect fraud in the early stages and end it before it negatively affects your business and clients.

Have you encountered fraudulent scenarios in your current or past business? What steps have you taken to mitigate the risk of fraud in your practice? Please share your comments below.