Can You Work Full-Time from a Tablet? With Surface Pro 3, You Can 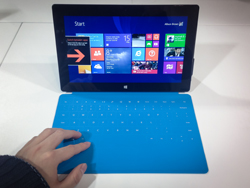 The thought of running an entire financial advisory practice from a tablet may raise a few eyebrows. I’ve certainly been skeptical of the idea in the past. But with Microsoft’s newest release of the Surface Pro 3, I think the ability to work full-time from a tablet is now a reality.

The Surface Pro 3 has some distinct features that aren’t available in its more established tablet competitors (think iPad, as well as Android and Fire tablets). Most notably, it runs a full version of Windows 8.1 Pro and has a USB 3.0 port. This means that everything you currently run or connect to on your desktop or laptop can be done on the Surface.

In essence, the Surface is a laptop in the form of a tablet, which is likely why, at $999, it’s more expensive than other tablets. My Surface came with an Intel i5 processor, 4 GB of RAM, and a 128 GB hard drive, and performance has been on par with my ThinkPad laptop.

Out of the box, the tablet is slightly larger and heavier than the first-generation iPad, though it’s still sleek in appearance. Some other features include:

The Surface has a friction kickstand that allows for an unlimited number of stand positions, from upright to flat. Unfortunately, you need to shell out another $129 if you want the somewhat flimsy snap-on keyboard cover, which I ended up doing.

Making the Most of the Metro/Desktop Interface

So far, so good, right? It’s a pretty impressive device. But what about the user interface? It wasn’t until I conducted my own test-drive that I finally understood what Microsoft was thinking with its crazy two-world Metro/Desktop Windows 8 interface.

The Metro interface was designed to be touched. The tiles are finger-friendly and don’t require the use of a mouse—you can sit with your Surface on an airplane or on the sofa and thumb through the news or e-mails just as you would on your iPad.

The Desktop interface comes into play when I’m in the office. If I need to crank out e-mails, update a spreadsheet, and jump from program to program, I can connect my mouse and keyboard to the Surface and use this interface for an experience that matches the good ol’ Windows 7 days. My coworkers often don’t even realize that I’m on my Surface at work because my setup hasn’t changed.

I use a Lenovo USB 3.0 docking station to connect two side-by-side monitors, a mouse, a full-size keyboard, a webcam, and headphones to my Surface Pro 3. (That’s right, you can now run video through USB 3.0.) It’s like I’m using a desktop computer in the office, but everything connects back to my tablet.

When it’s time to go home, I unplug the USB and power cords and slip the 1.75 lb. tablet under my arm. The embedded 9-hour lithium-ion battery usually gives me plenty of juice for nighttime use, so there’s no need to bring the charger cord home with me.

I haven’t used the Bluetooth pen all that frequently, but its functionality is similar to a mouse, allowing you to click on and open items. By clicking the button on the top of the pen, Microsoft’s digital notebook program OneNote auto-launches, ready for your scribbles. In PowerPoint, the pen allows you to make live annotations to a slide, which could be nice for client presentations.

My experience with the Surface Pro 3 tablet has been great. If you’re a road warrior, always keep your laptop within arm’s reach, or want to ease the stress on your back and shoulder from lugging around a laptop, this is a perfect replacement. I won’t be getting rid of my iPad anytime soon; the Surface is far from being as light, simple, and quick as the world’s best-selling tablet. And, unfortunately, the app selection from Microsoft pales in comparison to that of the App Store or Google Play.

Still, what the Surface lacks in apps and agility is made up for in its workhorse components and operating system. I’m now sold on the idea that it’s possible to work full-time from a tablet.

Do you own a Surface tablet? Have you considered replacing your laptop with one? Share your thoughts below!