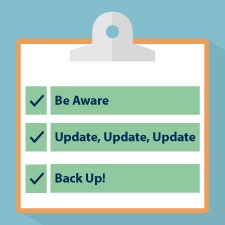 If you follow the news, you’ve likely heard of the WannaCry ransomware attack, one of the most widespread cyber attacks to date. Once infected with this ransomware, all information on the user’s computer is encrypted (i.e., locked away) unless a ransom of $300 to $600 is paid to the attackers in Bitcoin.

Security experts estimate that more than 200,000 users have been infected with this malware. And to make matters worse? There’s no evidence that the attackers have ever held up their end of the deal. Generally speaking, for those who have paid, the encrypted information was not returned in its normal state. In other words, this global attack just left ransomed information irrecoverable.

Can anything be done to defend against similar attacks in the future? Fortunately, the answer is "yes." Let’s review three valuable lessons learned from the WannaCry ransomware attack.

1) Keep Up with Security News

If we were keeping up with security news and read about the NSA leak, we would have been warned that our Microsoft software was wide open to an attack. But even if we had been able to follow these breadcrumbs, what could we have done? That’s where lesson #2 comes in.

When news of the NSA leak first broke in April, Microsoft immediately reported that it had released an appropriate security patch. In fact, it had released the patch in March—one month before the NSA leak. Sounds as if we should’ve been all set, right?

If everyone had updated their machines on time, that would have been true. Unfortunately, when we’re at our computers and an update box appears, we sometimes delay installation because we don’t want to be interrupted. But system updates often include critical security patches that protect us from current cyber attacks. Delaying their installation only leaves us vulnerable for a longer period of time.

It turns out that all 200,000 victims of the WannaCry ransomware attack had unpatched systems. Although the attack struck in May, these users hadn’t updated their Windows operating systems (and subsequently rebooted their computers) since before March, so the patch hadn’t taken effect.

Bottom line? The next time you’re prompted for an update, keep in mind that it could be the one thing that could protect you from attacks like WannaCry. If you have to delay installation, don’t delay for too long.

The single most important safeguard against ransomware is backups. If you back up all your information—and your machine becomes infected with ransomware—you already have a duplicate of everything the attackers are holding for ransom. No need to even consider paying!

But backups are effective only if they're done right. When adopting a backup process, keep these simple tips in mind:

Preventing Disaster Before It’s Too Late

A month after WannaCry, another cybersecurity event made headlines: the Petya (aka NotPetya) cyber attack. This malware entirely wiped out the hard drives it infected, appearing to target critical Ukraine systems (but spreading over into Europe and the U.S. as well).

Can you guess what vulnerability this attack took advantage of? The exact same one that was used in the WannaCry attack!

The truth is, many of us don’t take action until we find out we’re part of a major cyber attack. Yet we should be preparing for these threats before it’s too late. As we’ve seen with WannaCry—and then Petya/NotPetya—there are ways to prevent being affected.

There’s no telling what major cyber attack will be in the news next. But if we take the time to find the lessons in the last attack—and apply them to our own lives—we’ll be in a much better position to defend our information when the worst happens.

Do you regularly back up your information? Have you ever been victim to a ransomware attack? Please share your thoughts with us below!